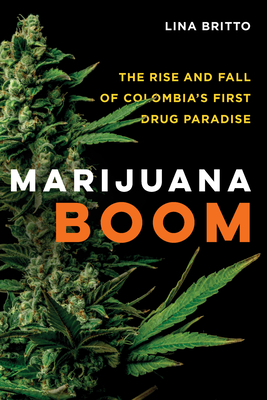 The Rise and Fall of Colombia's First Drug Paradise

Before Colombia became one of the world’s largest producers of cocaine in the 1980s, traffickers from the Caribbean coast partnered with American buyers in the 1970s to make the South American country the main supplier of marijuana for a booming US drug market, fueled by the US hippie counterculture. How did Colombia become central to the creation of an international drug trafficking circuit? Marijuana Boom is the story of this forgotten history. Combining deep archival research with unprecedented oral history, Lina Britto deciphers a puzzle: Why did the Colombian coffee republic, a model of Latin American representative democracy and economic modernization, transform into a drug paradise, and at what cost?

Praise For Marijuana Boom: The Rise and Fall of Colombia's First Drug Paradise…

"Marijuana Boom is an important book that foregrounds a regional history eclipsed by the subsequent cocaine industry that ‘car-bombed’ Colombia. . . . It approaches this history from multiple thematic angles and diverse geographies of power, with the help of diverse archival sources, newspapers, and interviews."

"This highly readable book will impress scholars across a range of subjects and deserves serious consideration for classroom adoption for courses on drugs, US-Latin American relations, and development and modernization."

"Marijuana Boom is a rich addition to the historiography of the Colombian drug trade, and Britto skilfully avoids the dangers that can arise when an argument incorporates oral histories. The passage of time can produce distortions, which is why archival research tends to dominate in the academic world. Marijuana Boom demonstrates the value in supplementing thorough archival research with the collection and analysis of oral histories."

"A significant accomplishment. . . . Britto writes with a journalistic flair that will make her book accessible to undergraduate and graduate students, their professors, and the public at large."
— Revista de Estudios Colombianos

Lina Britto is Assistant Professor of History at Northwestern University.
Loading...
or support indie stores by buying on