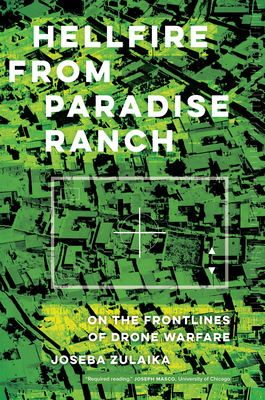 On the Front Lines of Drone Warfare

In this intimate and innovative work, terror expert Joseba Zulaika examines drone warfare as manhunting carried out via satellite. Using Creech Air Force Base near Las Vegas as his center of study, he interviews drone operators as well as resisters to the war economy of the region to expose the layers of fantasy on which counterterrorism and its self-sustaining logic are grounded.

Hellfire from Paradise Ranch exposes the terror and warfare of drone killings that dominate our modern military. It unveils the trauma drone operators experience, in part due to their visual intimacy with their victims, and explores the resistance to drone killings in the same apocalyptic Nevada desert where nuclear testing, pacifist militancy, and Shoshone tradition overlap.

Stunning and absorbing, Zulaika offers a richly detailed account of how we continue to manufacture, deconstruct, and perpetuate terror.