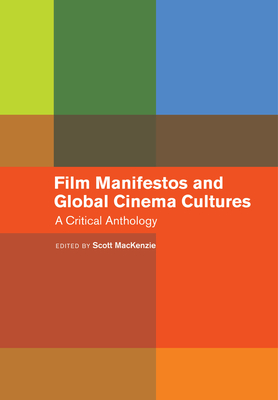 Film Manifestos and Global Cinema Cultures is the first book to collect manifestoes from the global history of cinema, providing the first historical and theoretical account of the role played by film manifestos in filmmaking and film culture. Focusing equally on political and aesthetic manifestoes, Scott MacKenzie uncovers a neglected, yet nevertheless central history of the cinema, exploring a series of documents that postulate ways in which to re-imagine the cinema and, in the process, re-imagine the world.

"Every so often, a book appears that instantly commands my attention as a work of inescapable importance. Film Manifestos and Global Cinema Cultures: A Critical Anthology is such a volume. . . .The most important film book of 2014."
— Film International

"The most important film book of the year. . . . required reading for both students and lovers of cinema."
— CHOICE

"Scott MacKenzie’s astonishingly broad and amazingly thorough assembly of some 180 manifestos, Film Manifestos and Global Cinema Cultures: A Critical Anthology, gives a vivid sense of the centrality of the manifesto to the breadth and scope of cinema as it exists today."
— Film Quarterly

Scott MacKenzie is Professor of Film and Media Studies at Queen’s University in Ontario. He is co-editor of Films on Ice: Cinemas of the Arctic and Arctic Cinemas and the Documentary Ethos.