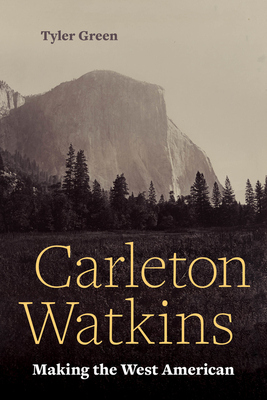 Best Books of 2018—The Guardian

Carleton Watkins (1829–1916) is widely considered the greatest American photographer of the nineteenth century and arguably the most influential artist of his era. He is best known for his pictures of Yosemite Valley and the nearby Mariposa Grove of giant sequoias.

Watkins made his first trip to Yosemite Valley and Mariposa Grove in 1861 just as the Civil War was beginning. His photographs of Yosemite were exhibited in New York for the first time in 1862, as news of the Union’s disastrous defeat at Fredericksburg was landing in newspapers and while the Matthew Brady Studio’s horrific photographs of Antietam were on view. Watkins’s work tied the West to Northern cultural traditions and played a key role in pledging the once-wavering West to Union.

Motivated by Watkins’s pictures, Congress would pass legislation, signed by Abraham Lincoln, that preserved Yosemite as the prototypical “national park,” the first such act of landscape preservation in the world. Carleton Watkins: Making the West American includes the first history of the birth of the national park concept since pioneering environmental historian Hans Huth’s landmark 1948 “Yosemite: The Story of an Idea.”

Watkins’s photographs helped shape America’s idea of the West, and helped make the West a full participant in the nation. His pictures of California, Oregon, and Nevada, as well as modern-day Washington, Utah, and Arizona, not only introduced entire landscapes to America but were important to the development of American business, finance, agriculture, government policy, and science. Watkins’s clients, customers, and friends were a veritable “who’s who” of America’s Gilded Age, and his connections with notable figures such as Collis P. Huntington, John and Jessie Benton Frémont, Eadweard Muybridge, Frederick Billings, John Muir, Albert Bierstadt, and Asa Gray reveal how the Gilded Age helped make today’s America.

Drawing on recent scholarship and fresh archival discoveries, Tyler Green reveals how an artist didn’t just reflect his time, but acted as an agent of influence. This telling of Watkins’s story will fascinate anyone interested in American history; the West; and how art and artists impacted the development of American ideas, industry, landscape, conservation, and politics.

Tyler Green is an award-winning critic and historian. He is the producer and host of The Modern Art Notes Podcast, America's most popular audio program on art, and was previously the editor of the website Modern Art Notes, which published from 2001 to 2014. This is his first book.
Loading...
or support indie stores by buying on