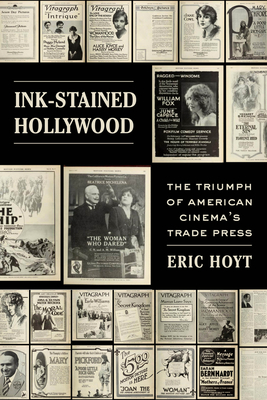 For the first half of the twentieth century, no American industry boasted a more motley and prolific trade press than the movie business—a cutthroat landscape that set the stage for battle by ink. In 1930, Martin Quigley, publisher of Exhibitors Herald, conspired with Hollywood studios to eliminate all competing trade papers, yet this attempt and each one thereafter collapsed. Exploring the communities of exhibitors and creative workers that constituted key subscribers, Ink-Stained Hollywood tells the story of how a heterogeneous trade press triumphed by appealing to the foundational aspects of industry culture—taste, vanity, partisanship, and exclusivity. In captivating detail, Eric Hoyt chronicles the histories of well-known trade papers (Variety, Motion Picture Herald) alongside important yet forgotten publications (Film Spectator, Film Mercury, and Camera!), and challenges the canon of film periodicals, offering new interpretative frameworks for understanding print journalism’s relationship with the motion picture industry and its continued impact on creative industries today.

Eric Hoyt is the Kahl Family Professor of Media Production at the University of Wisconsin–Madison. He is author of Hollywood Vault: Film Libraries before Home Video and is Director of the Media History Digital Library and the Wisconsin Center for Film and Theater Research.
Loading...
or support indie stores by buying on