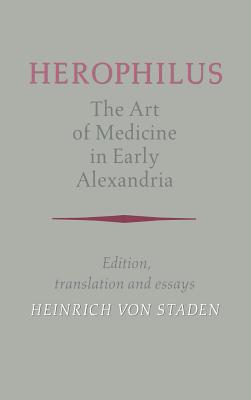 The Art of Medicine in Early Alexandria: Edition, Translation and Essays

Herophilus, a contemporary of Euclid, practiced medicine in Alexandria in the third century B.C., and seems to have been the first Western scientist to dissect the human body. He made especially impressive contributions to many branches of anatomy and also developed influential views on many other aspects of medicine. Von Staden assembles the fragmentary evidence concerning one of the more important scientists of ancient Greece. Part 1 of the book presents the Greek and Latin texts accompanied by English translation and interpretative commentary. Significant background information is given in the introductory essay preceding each chapter. Part 2 briefly sketches the major developments within the Herophilean school after Herophilus, and discusses the individual members within it. Anyone interested in the history of science, the history of medicine, or intellectual history will find this book a rich source of information about an unusual and important aspect of Greek culture.