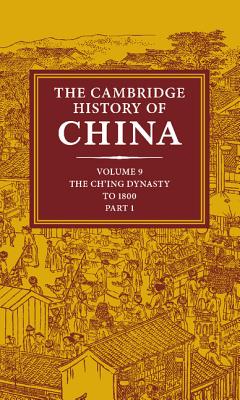 The Cambridge History of China (Hardcover)

This volume of The Cambridge History of China considers the political, military, social, and economic developments of the Ch'ing empire to 1800. The period begins with the end of the resurgent Ming dynasty, covered in Volumes 7 and 8, and ends with the beginning of the collapse of the imperial system in the nineteenth century, described in Volume 10. Ten chapters elucidate the complexities of the dynamic interactions between emperors and their servitors, Manchus and non-Manchu populations, various elite groups, competing regional interests, merchant networks and agricultural producers, and rural and urban interests, and, at work among all these tensions, between old and new. China under the Ch'ing dynasty changed, and this volume presents these changes underway in the period prior to the advent of Western imperialist military power.
or support indie stores by buying on
Copyright © 2020 American Booksellers Association