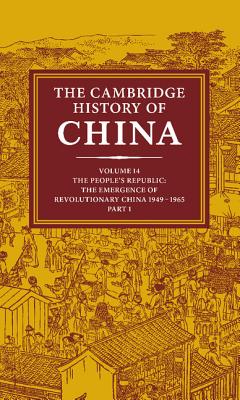 This is the first of the two final volumes of The Cambridge History of China, which describe the efforts of the People's Republic of China to grapple with the problems of adaptation to modern times. Volume 14 deals with the achievements of the economic and human disasters of the new regime's first sixteen years (1949-65). Part I chronicles the attempt to adapt the Soviet model of development to China, and Part II covers the subsequent efforts of China's leaders to find native solutions that would provide more rapid and appropriate answers to China's problems. Each of the two parts of the volume analyzes the key issues and developments in the spheres of politics, economics, culture, education, and foreign relations. The contributors, all leading scholars of the period, show the interrelation of Chinese actions in all these spheres, and the describe how, gradually, events led to the Cultural Revolution launched by Mao Tse-tung in 1966.