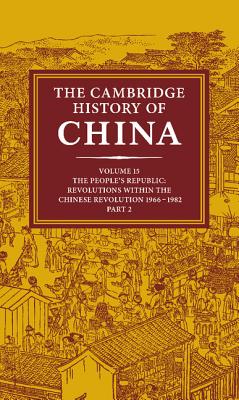 Volume 15 of The Cambridge History of China is the second of two volumes dealing with the People's Republic of China since its birth in 1949. The harbingers of the Cultural Revolution were analyzed in Volume 14. Volume 15 traces a course of events still only partially understood by most Chinese. It begins by analyzing the development of Mao's thought since the Communist seizure of power, in an effort to understand why he launched the movement. The contributors grapple with the conflict of evidence between what was said favorably about the Cultural Revolution at the time and the often diametrically opposed retrospective accounts. Volume 15, together with Volume 14, provide the most comprehensive and clearest account of how revolutionary China has developed in response to the upheavals initiated by Mao and Teng Hsiao-p'ing.