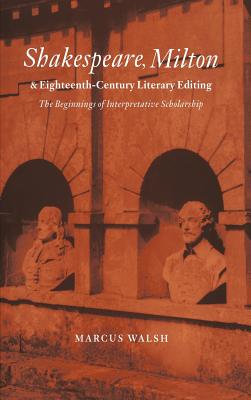 This study sets out to investigate the theoretical and especially the interpretative bases of eighteenth-century literary editing. Extended chapters on Shakespearean and Miltonic commentary and editing demonstrate that the work of pioneering editors and commentators, such as Patrick Hume, Lewis Theobald, Zachary Pearce, and Edward Capell, was based on developed, sophisticated, and often clearly articulated theories and methods of textual understanding and explanation. Marcus Walsh relates these interpretative theories and methods to seventeenth- and eighteenth-century Anglican biblical hermeneutics, and to a number of debates in modern editorial theory.
or support indie stores by buying on
Copyright © 2020 American Booksellers Association