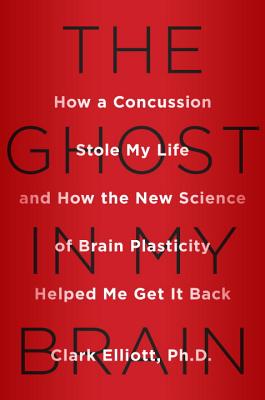 The Ghost in My Brain

In 1999, Clark Elliott suffered a concussion when his car was rear-ended. Overnight his life changed from that of a rising professor with a research career in artificial intelligence to a humbled man struggling to get through a single day. At times he couldn’t walk across a room, or even name his five children. Doctors told him he would never fully recover. After eight years, the cognitive demands of his job, and of being a single parent, finally became more than he could manage. As a result of one final effort to recover, he crossed paths with two brilliant Chicago-area research-clinicians—one an optometrist emphasizing neurodevelopmental techniques, the other a cognitive psychologist—working on the leading edge of brain plasticity. Within weeks the ghost of who he had been started to re-emerge.

Remarkably, Elliott kept detailed notes throughout his experience, from the moment of impact to the final stages of his recovery, astounding documentation that is the basis of this fascinating book. The Ghost in My Brain gives hope to the millions who suffer from head injuries each year, and provides a unique and informative window into the world’s most complex computational device: the human brain.


Praise For The Ghost in My Brain: How a Concussion Stole My Life and How the New Science of Brain Plasticity Helped Me Get It Back…

“This is a remarkable document, by a remarkable person,  the most meticulous and informative account I have ever read of the effects of a traumatic brain injury on a single mind. It should be mined for years to come by all who care about the subject, and is filled with almost Proustian detail about how the brain and mind and heart respond to injury.  It would have been just another tragedy, but instead, it turns into an exciting triumph, because of the tireless, ingenious, and utterly creative work of Clark Elliott and his healers—one inspired by the work of the Israeli pioneer, Reuven Feurstein, the other by a little known tradition of neuro-optometric rehabilitation, which can literally use light shone into the eyes, to treat and rewire the brain.”—Norman Doidge, M.D., New York Times bestselling author of The Brain That Changes Itself and The Brain’s Way of Healing

“For anyone who has struggled to explain cognition or to understand what it feels like to suffer from traumatic brain injury, Clark Elliott’s fascinating account of his injury, diagnosis and then painstaking determination to heal himself reads like a how-to manual of how our brains work . . . His story gives hope to everyone out there and shines a light on the neuroplastic possibilities that exist for us all in the future."—Bob Woodruff, ABC-TV News correspondent and Lee Woodruff, authors of In an Instant

"Elliott's transformative tale will be invaluable for patients with traumatic brain injury, families, and caregivers."—Publishers Weekly

"Up-close view of living with the harrowing effects of a concussion... With concussions from sports injuries making the news, Elliott's easy-to-read account of his experiences is a valuable contribution to a better understanding of the condition."—Kirkus

“It is not often that one can gain some genuine insight into the soul-destroying and debilitating experiential world of victims of Mild Traumatic Brain Injury (MTBI). But through the brilliant descriptions that Clark Elliott provides, we can at least begin to grasp its devastating perceptual, cognitive, and behavioral consequences—its profound disruption of every aspect of normal daily life, of thinking and deciding, feeling and wanting, seeing and hearing, moving, and of our very sense of who we are. This is an extraordinary book about the brain and the mind—a book that is hard to stop reading.”—Andrew Ortony, Ph.D., Professor Emeritus of Psychology, Computer Science, and Education, Northwestern University

“Inspiring . . . Read it, first weep, then smile broadly!”—Daniel Federman, Dean Emeritus, Harvard School of Medical Education, and past president of the American College of Physicians

“I have diagnosed more than six hundred mild traumatic brain injury (MTBI) cases over thirty years of practice and know firsthand the devastating effects they can have on virtually any family. Dr. Clark Elliott’s comprehensive and creative analysis of this pathological epidemic is uniquely insightful, accurate, scary—and most importantly encouraging—for those who are afflicted with this disorder.”—Michael P. Szatalowicz, D.C., A.O., whiplash trauma specialist

Clark Elliott, PhD, is an associate professor of artificial intelligence at DePaul University. He holds three teaching certificates for music, the B.M., M.M. (music), and M.S. (computer science) degrees, and a PhD from Northwestern’s Institute for the Learning Sciences with an emphasis on artificial intelligence. He lives in Evanston, Illinois.
Loading...
or
Not Currently Available for Direct Purchase