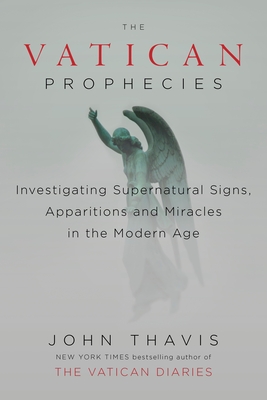 Investigating Supernatural Signs, Apparitions, and Miracles in the Modern Age

“The process by which these supernatural events are authenticated is expertly told by John Thavis, one of the world’s leading Vaticanologists. In fact, that a book on so secretive and complex a topic is so deeply researched, beautifully written, and artfully told is something of a small miracle itself.”—James Martin, S.J., author of Jesus: A Pilgrimage

From the New York Times bestselling author of The Vatican Diaries, a fascinating behind-the-scenes look at how the Vatican investigates claims of miraculous events

Apocalyptic prophecies and miraculous apparitions are headline-grabbing events that often put the Catholic Church’s concept of “rational faith” at odds with the passion of its more zealous followers. To some, these claims teeter on the edge of absurdity. Others see them as evidence of a private connection with God. For the Vatican, the issue is much more nuanced as each supposed miraculous event could have serious theological and political consequences. In response, the Vatican has developed a highly secretive and complex evaluation system to judge the authenticity of supernatural phenomena.

Former journalist John Thavis uses his thirty years’ experience covering the Vatican to shed light on this little-known process, revealing deep internal debates on the power of religious relics, private revelations, exorcisms, and more. Enlightening and accessible to Catholics and non-Catholics alike, the book illustrates the Church’s struggle to balance the tension between traditional beliefs and contemporary skepticism.

John Thavis is the prizewinning former Rome bureau chief of the Catholic News Service. He has written extensively on religious issues in Europe and the Middle East, has lectured on Vatican affairs in the United States and Europe, and has won awards for his firsthand reporting on the war in the Balkans. In addition to numerous awards for individual excellence and analytical reporting, he has received the St. Francis de Sales Award, the highest honor given by the Catholic press.  He lives in Minnesota.

Praise For The Vatican Prophecies: Investigating Supernatural Signs, Apparitions, and Miracles in the Modern Age…

Praise for The Vatican Prophecies
“What makes this book a page-turner that many will find difficult to put down are its countless stories about the work, convictions and religious experiences of real people. . . . The Vatican Prophecies examines a question that Thavis says ‘Catholic thinkers and officials are trying to answer’ with mounting urgency: ‘In the 21st century, can the miraculous and the reasonable peacefully coexist?’”
—Catholic News Service

“[Thavis's] new book shares how the Vatican deals with supernatural — or supposedly supernatural — events, from holy relics to instances of possession. Thavis makes it clear that events of this sort put the Vatican in a difficult spot. On one hand, they cannot reject such supernatural phenomena outright, as to do so would reject many elements of the religion’s history. At the same time, every claim of a supernatural or otherworldly presence must be handled with extreme skepticism, to prevent the Church from being taken in by charlatans, any one of whom could deal a blow to the Church’s credibility.”
—The New York Post

“[A]s much a compulsory read for any Catholics who may think they understand the mysterious side of their faith as it is for the skeptics who criticize the Catholic customs.”
—The Daily Beast

“Thavis’s second book is a lively, far-reaching exploration of the paranormal aspects of the Catholic faith, investigating both the role that such phenomena play in the lives of parishioners and the official stance of the institutional church . . . . [The Vatican Prophecies] is an engaging introduction.”
—Kirkus Reviews

“This engaging overview of contemporary supernatural occurrences is filled with stories and case studies. Catholics and those interested in Christian history will appreciate this exploration of the efforts to balance modern rationalism with traditional devotional practices.”
—Library Journal

“The process by which these supernatural events are authenticated is expertly told by John Thavis, one of the world’s leading Vaticanologists. In fact, that a book on so secretive and complex a topic is so deeply researched, beautifully written, and artfully told is something of a small miracle itself.”
—James Martin, S.J., author of Jesus: A Pilgrimage

Praise for The Vatican Diaries

“Wonder what’s going on behind those huge doors at the Vatican? Wonder what those cardinals are up to as they scurry about getting ready to elect a new pope? Wonder what the man who rings the bells when that new pope is finally elected is thinking? Thavis answers all in this fascinating book.”
—USA Today

“A veritable handbook on all things Vatican.”
—The Daily Beast

“A thoughtful meditation on recent papal administrations and the bureaucrats, functionaries, and emissaries who advance or thwart Rome's global ambitions.”
—New York Journal of Books

“Most fascinating is Thavis’ generous assessment of Benedict XVI, whom he sees as an almost tragic figure.”
—The New Yorker

“Thavis’s Vatican Diaries is well worth putting on your Amazon wish list.”
—Forbes

“[The Vatican Diaries] succeeds well in presenting the Roman Curia as a flesh—and—blood community, a byzantine theater of the sacred.”
—National Catholic Reporter

“A lively book that's steeped in history and personality.”
—The Eagle Tribune

“Thavis has offered this rare, perceptive and highly readable glimpse into a power structure that is less in control than many would have us believe.”
—America

“Illuminating and fully accessible to members of the faith and doubters alike.”
—Kirkus Reviews

“In an age when social media threatens to emasculate news and current affairs, Thavis’ work is a refreshing sign that great journalism is not dead. Instead of the inane trivia that now passes for ‘news’, Thavis provides us with an account of great depth carefully tempered with censure and sympathy.”
—Justin Cahill, Booktopia

“An American Catholic who has done his homework, learned Latin and Italian, made friends in high places, found his way for thirty years in the maze of Church bureaucracy, gives us a humane and realistic and (yes) humorous picture of a mortal institution that guides hundreds of millions of mortals along the path from birth to death and beyond. To an old Prot like me, it’s a tour of alien terrain and a bridge to old and dear friends.”
—Garrison Keillor

“Vatican Diaries is a must-read for anyone interested in the Vatican’s role in the Catholic Church and the world.
—Thomas J. Reese, S.J.

“The Vatican Diaries by John Thavis provides us with an intriguing and much needed antidote to one of the most common problems affecting many Catholics and non—Catholics who look at the Vatican these days: the assumption of the cold ruthlessness of the ‘machine’. Thavis shows us also the deeply human side of the Vatican, the last Empire and the last, great theater of the sacred in Western Christianity.”
—Massimo Faggioli, University of St. Thomas

“In this highly readable memoir of being a journalist at the Vatican, John Thavis follows the conclaves, sex scandals, internal backstabbing and olympian nature of the popes with a sense of comic relief at the caravan passing through his viewfinder.”
—Jason Berry, author of Render unto Rome: The Secret Life of Money in the Catholic Church
or
Buy Here
Copyright © 2020 American Booksellers Association