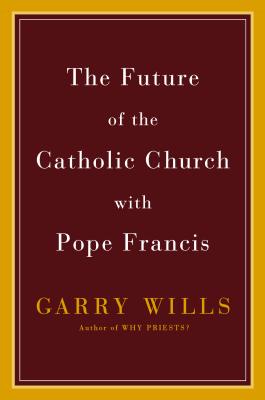 The Future of the Catholic Church with Pope Francis (Hardcover)

Pope Francis, the first Jesuit pope and the first from the Americas, offers a challenge to his church. Can he bring about significant change? Should he?

Garry Wills, the Pulitzer Prize-winning historian, argues provocatively that, in fact, the history of the church throughout is a history of change. In this brilliant and incisive study, Wills describes the deep and serious changes that have taken place in the church or are in the process of occurring. These include the change from Latin, the growth and withering of the ecclesiastical monarchy, the abandonment of biblical literalism, the assertion and nonassertion of infallibility, and the erosion of church patriarchy. In such developments we see the living church adapting itself to the new historical circumstances.

As Wills contends, it is only by examining the history of the church that we can understand Pope Francis's and the church's challenges.

GARRY WILLS is a historian and the author of the New York Times bestsellers What Jesus Meant, Papal Sin, Why I Am a Catholic, and Why Priests?, among others. A frequent contributor to The New York Review of Books and other publications, Wills is a Pulitzer Prize winner and a professor emeritus at Northwestern University. He lives in Evanston, Illinois.

Praise For The Future of the Catholic Church with Pope Francis…

Praise for  The Future of the Catholic Church with Pope Francis:

“A lively exercise in church history—history intended to orient us in the here and now. It is addressed not only to Catholics but to the entire church as `the People of God,’ . . . and to anyone else—practicing another religion or emphatically not—who is curious to learn how one of our foremost historians and public intellectuals understands his faith."
— The Chicago Tribune

“The church, Wills argues, may act like it never changes. But in the pages of this book, he shows us that it can. . . .Wills’s historical chops are on vivid display in his new title: he can zip from the church’s distortion of the stories of early martyrs to contemporary battles over the use of Latin in liturgy. . . . He writes for a wide audience of skeptics, doubters, and questioners.”
— The Guardian

“We are two years into a new papal era…[Francis] is unsettling the church—in order to set it aright. Garry Wills’s new book is a valuable compass for this new terrain.” — The Washington Post

“Wills thinks deeply, and then goes public with his thoughts. Not a mission for the faint of heart, especially when it comes to the Roman Catholic Church. Wills is both a lifelong member of the church, and one of its fiercest critics. His current preoccupation is with Pope Francis. . . . Wills has high hopes for the new pope’s ability to shine a light into the dark corners of the church, but he’s under no illusion that it will be easy. . . . This book is not so much about Pope Francis as an informed look at the Catholic Church and the challenges he faces. Whether you are religious or not, it’s a subject worth paying attention to.”
-- The Seattle Times

"Wills ranges widely through the Catholic past. . . [his book] provides a comprehensive. . . and eye-opening account of a pivotal period in recent American social history."
--The Los Angeles Review of Books

“Wills turns his sword on certain beliefs, some of which have been reformed, but whose influence lingers in the dark corners of chanceries. . . . Wills speaks not from left field, but from inside the church, a regular Massgoer with a devotion to the rosary.”
--National Catholic Reporter

“Wills discusses the reforms that Francis, the world’s first Jesuit pope and the first from the Americas, has implemented but also places them in a larger context of a church that has undergone far more change over the past 2,000 years than many might realize.”
— The Austin American Statesman

“Beautifully conceived and wrought essays that systematically address the wrongheadedness of the Catholic Church over centuries—and the space therein for Francis' long-needed reforms. A pope determined to admit change and renounce ‘infallibility’—is this possible? Pulitzer Prize-winning intellectual and leading Catholic scholar Wills is guided by his close scholarly readings of the Gospels, as well as by modern commentators, examining how the church can right itself—as it has repeatedly over the ages in the face of bad decisions . . . A welcome, thoughtful menu for the new pope on how to proceed with reform.”
— Kirkus Reviews (starred review)

“Is it possible, or even prudent, for an institution that has survived for 2,000 years to change? The Catholic Church, according to Wills, has changed substantially over the course of its existence and must continue to do so . . . [Wills] presents fascinating historical snapshots of the church throughout its history and illustrates the shifts it has navigated, from adopting and then dismissing universal Latin for its liturgical language to rejecting its embedded anti-Semitism at the Second Vatican Council . . . well researched, [Wills] offer[s] valuable insights into the contemporary political landscape.”
—Publishers Weekly

“Garry Wills is not only one of the country’s most distinguished intellectuals but also one of its most provocative.”
—The New York Times Book Review

“Wills brings to bear the skills that have justly brought him renown as America’s greatest public intellectual: encyclopedic erudition, concise prose and a polyglot’s gift for languages.”
—The Chicago Tribune

Praise for Why Priests?: A NEW YORK TIMES BESTSELLER

“Wills draws on his expertise in classical languages and his wide reading in ecclesiastical history to argue that the Catholic/Orthodox priesthood has been one long mistake.”
—The Washington Post

“How. . .did priests become dominant and then essential in Catholic Christianity? And why, Wills asks, in this provocative [and] historically rich . . . book, does the Vatican continue to sustain such falsehoods? . . . [C]rucially informative and enlightening.”
—The New Republic

“Using his linguistic skills and his impressive command of both secondary literature and patristic sources, Wills raises doubts aplenty about ‘the Melchizedek myth,’ and the priestly claims for Jesus in the ‘idiosyncratic’ Epistle to the Hebrews … His final chapter is a model of elegant simplicity, a contrast (intended or not) to the flummery often associated with his own church … ‘There is one God, and Jesus is one of his prophets,’ Wills concludes, ‘and I am one of his millions of followers.’ For those millions, scattered across time and space, that’s an affirmation worthy of celebration.”
—The New York Times Book Review

“Do we really need Catholic Priests? Wills, Pulitzer Prize winner and author of Why I Am a Catholic, dares to pose this controversial question[.] . . . One cannot help but be impressed with this brilliant work written by a scholar whose love for the Church compels him to make it better.”
—Publishers Weekly
or
Not Currently Available for Direct Purchase
Copyright © 2020 American Booksellers Association