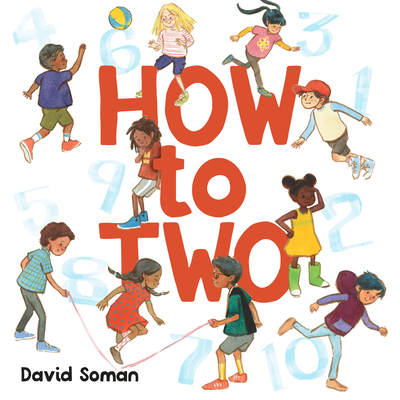 How To Two (Hardcover)

From the co-creator of the New York Times bestselling Ladybug Girl series comes a joyful counting book about inclusivity, play, and the thrill of making new friends--from one to ten and back again.

A quiet day at the playground turns into a boisterous park-wide adventure as one boy on the slide becomes two kids on the see-saw, then three jumping rope. Before long, ten new friends are playing like they've known one another forever.

With its deceptively simple text and a rich visual narrative, How to Two is a playful counting and reverse-counting concept book as well as an exuberant celebration of inclusive play, friendship, and community.

David Soman hails from a family of artists, and has been drawing since he could walk (over to the kitchen walls to draw on them). He is the New York Times bestselling co-creator of the Ladybug Girl series with his wife Jacky Davis, as well as author and illustrator of Three Bears in a Boat and The Monster Next Door. David, Jacky, their children, and a big furry dog live in New York's Hudson Valley. When not working on picture books, shoveling snow, or chopping firewood, David is an instructor at the School of Visual Arts in New York City.

Praise For How To Two…

“Exciting . . . In kinetic illustrations, Soman champions diversity, inclusiveness, and the power of allowing children to play as they wish.” —Publishers Weekly

★ "A counting book that could also serve as a set of inclusivity instructions. . . . Inviting . . . Seamless . . . Diverse . . . Friendly . . . Bright . . . When, at sunset, the adults arrive [at the playground] to collect their children, Soman depicts what appear to be single parents, same-sex couples, grandparents, and a mother in a hijab; it’s a wonderfully mixed group. . . . This joyous celebration of play closes with an invitation to spot ten creatures in the park; viewers will be happy to return to the beginning to find them.” —The Horn Book (starred review)

“Most valuable . . . are Soman's thoughtful, diverse depictions of the children and families . . . No two ways about it—this one is a delight.” —Kirkus

"Celebrates the joy and energy of childhood . . . Dynamic . . . Children will easily see themselves in [these pages]." —Booklist
or support indie stores by buying on
Copyright © 2020 American Booksellers Association