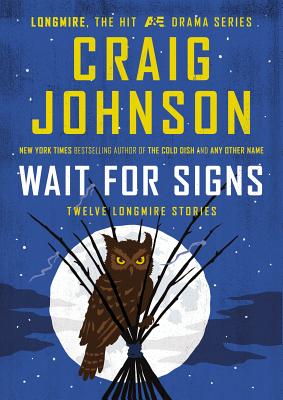 Twelve Longmire short stories available for the first time in a single volume—featuring an introduction by Lou Diamond Phillips of the hit drama series Longmire, now on Netflix

Ten years ago, Craig Johnson wrote his first short story, the Hillerman Award–winning “Old Indian Trick.” This was one of the earliest appearances of the sheriff who would go on to star in Johnson’s bestselling, award-winning novels and the hit drama series Longmire. Each Christmas Eve thereafter, fans rejoiced when Johnson sent out a new short story featuring an episode in Walt’s life that doesn’t appear in the novels; over the years, many have asked why they can’t buy the stories in book form.

Wait for Signs collects those beloved stories—and one entirely new story, “Petunia, Bandit Queen of the Bighorns”—for the very first time in a single volume, regular trade hardcover. With glimpses of Walt’s past from the incident in “Ministerial Aide,” when the sheriff is mistaken for a deity, to the hilarious “Messenger,” where the majority of the action takes place in a Port-A-Potty, Wait for Signs is a necessary addition to any Longmire fan’s shelf and a wonderful way to introduce new readers to the fictional world of Absaroka County, Wyoming.

“This story collection featuring the ironic Wyoming sheriff is a must....[Walt Longmire is] one of the most memorable characters is crime fiction today.”—Publishers Weekly

“Heartwarming....Sample, savor, and save these [short stories] for special occasions.”—Booklist

“For fans of Johnson’s Absaroka County sheriff, all the familiar characters fill these stories—Walt, Vic, Henry, Cady, and of course the wild, open spaces of Wyoming’s Bighorn Mountains.”—Library Journal (starred)

Praise for Spirit of Steamboat:

Praise for A Serpent’s Tooth:

"A tense, action-filled story with Johnson's usual touches of humor and romance."—Kirkus

"Johnson employs his trademark humor, many literary allusions, a cast readers can't help but love and Johnson's obvious love of the land he's writing about. Readers will experience the West in all its grandeur while Walt battles the evils trying to encroach upon his beloved county."—Shelf Awareness

Craig Johnson is the author of the award-winning and New York Times bestselling Longmire mystery series, the basis for Longmire, the hit A&E original drama series. Johnson's next Longmire book, Any Other Name, will be published May 13, 2014. He lives in Ucross, Wyoming, population twenty-five. Visit craigallenjohnson.com and aetv.com/longmire.
Loading...
or
Not Currently Available for Direct Purchase