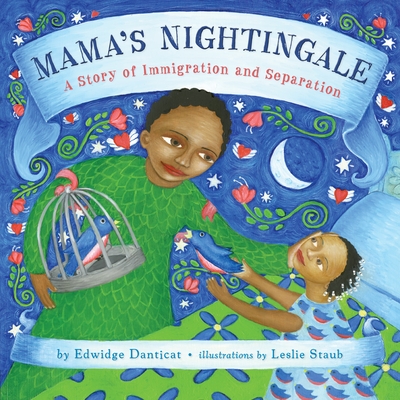 A Story of Immigration and Separation

A touching tale of parent-child separation and immigration, from a National Book Award finalist

After Saya's mother is sent to an immigration detention center, Saya finds comfort in listening to her mother's warm greeting on their answering machine. To ease the distance between them while she’s in jail, Mama begins sending Saya bedtime stories inspired by Haitian folklore on cassette tape. Moved by her mother's tales and her father's attempts to reunite their family, Saya writes a story of her own—one that just might bring her mother home for good.

With stirring illustrations, this tender tale shows the human side of immigration and imprisonment—and shows how every child has the power to make a difference.

Praise For Mama's Nightingale: A Story of Immigration and Separation…

* "A must-read both for children who live this life of forced separation and those who don't."—Kirkus Reviews, starred review

"A serious yet hopeful story...readers similarly separated from a loved one may well find solace in Danticat’s honest storytelling."—Publishers Weekly

"Children of parents who are being detained will be comforted by knowing they are not the only ones facing this challenge and might even be inspired to take action the way Saya does."—The Horn Book

"Danticat’s immigration story is compelling...The inclusion of Haitian phrases adds to the personal nature of the story, whose happy ending is deserved by all."—Booklist

Edwidge Danticat was born in Haiti and came to the United States when she was twelve years old. Her books have been selected for Oprah’s Book Club and have been twice nominated for the National Book Award. In 2009 Edwidge received a MacArthur Genius Grant. She lives in Miami, Florida.

Leslie Staub is a children's book author and illustrator from New Orleans, LA. She works in her studio in the country north of there with her dog, Rabbit, and all the wild creatures who live in the woods.
Loading...
or support indie stores by buying on