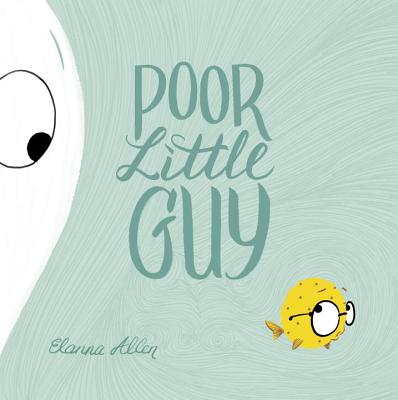 With the cheeky twist of Jon Klassen’s This Is Not My Hat and the graphic appeal of Mo Willems, Poor Little Guy will leave kids giggling…and begging for rereads!

What do you do when you're so tiny that the bigger ocean creatures think you might even taste adorable?

An itsy-bitsy, glasses-wearing fish is minding his own business when a playful (and hungry) octopus snatches him right up. Luckily, this poor little guy is not quite as innocent as he seems…and he has a BIG surprise up his sleeve!

Told with wit, a wink, and a delightfully dark sense of humor, Poor Little Guy celebrates the very smallest...and all of their giant victories. Hand this cute but mighty book to fans of Bob Shea and Dan Krall.

"A clever and visually striking tale that proves revenge is a dish best served wet."—Publishers Weekly

"A clear victory for a pufferfish and, more importantly, readers."—Kirkus Reviews

"This expressive, darkly funny picture book is sure to amuse kids and parents alike—and maybe reinforce that it’s a bad idea to play with your food. Suggest to fans of Jon Klassen’s This Is Not My Hat."—Booklist

"The surprise ending will have readers going back again and again to see the octopus’s reaction."—School Library Journal

"Both story and art will carry well to a crowd, making this a particularly seaworthy addition to an ocean-themed storytime or classroom study, or pair it with Klassen’s This Is Not My Hat for a duo of (fish) tales about rough justice, marine style."—BCCB

Elanna Allen graduated from Brown University and studied animation and illustration at the Rhode Island School of Design. She has designed characters and directed animation for Disney Junior, Nick Jr, and PBS. She lives in New York City with her husband and two boys, and is currently learning to play the ukulele.
Loading...
or
Not Currently Available for Direct Purchase