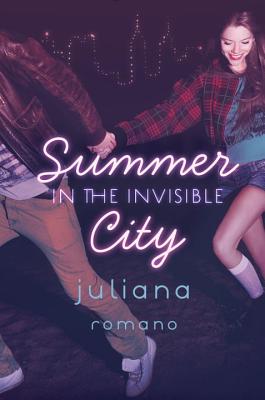 Summer in the Invisible City

Perfect for fans of Jenny Han and Sarah Dessen, a sparkling coming-of-age story about self-discovery, first love, and the true meaning of family

Seventeen-year-old Sadie Bell has this summer all figured out: She’s going to befriend the cool girls at her school. She's going to bond with her absentee father, a famous artist, and impress him with her photography skills. And she’s finally going to get over Noah, the swoony older guy who was her very first mistake.

Sadie wasn’t counting on meeting Sam, a funny and free-thinking boy who makes her question all of her goals. But even after a summer of talking, touching, and sharing secrets, Sam says he just wants to be friends. And when those Sadie cares about most hurt her, Sam's friendship may not be enough. Sadie can see the world through her camera, but can she see the people who have loved and supported her all along?

Set against a glamorous New York City backdrop, this coming-of-age romance is a gorgeous summer read—one whose characters will stay with you long into the fall.

Praise For Summer in the Invisible City…

Praise for Summer in the Invisible City:

“Romano’s novel wanders languorously through Sadie’s summer, treating readers to the same lushly detailed writing that distinguished her previous book… readers will enjoy meandering through the joys and disappointments of this quiet, reflective teen.”—Publishers Weekly

"A lovely summer romance with plenty to say about art, friendship, and love."—Booklist

"Her misplaced search for fatherly love and acceptance adds an extra level of depth and introspection to the author’s sophomore novel...A recommended purchase for fans of teen romance."—School Library Journal

"Full of wonderful details of the daily life of an interesting central female character...as she navigates through a tough summer of learning about herself, what she wants for the future, and how her past defines her path forward."—VOYA

Praise for First There Was Forever:

* “Fans of Sarah Dessen and Jenny Han won’t want to miss this sensitive exploration of romantic and platonic relationships in flux, and young women coming into their own.”—Publishers Weekly, starred review

“With descriptions that are rich, intimate, and a pure pleasure to read...[Romano] captures the awkwardness of teenagers grappling with feelings for which they have no language yet. In Nate and Lima, young readers will find a relationship that is both deliciously dreamy and achingly real.”—The Los Angeles Review of Books

“Romano succeeds in capturing the awkwardness of first romantic encounters and in navigating the growing gray areas in life that emerge with age. Hand this one to fans of Jenny Han and Morgan Matson.”—Booklist

“The author weaves her story together with expressive, figurative language...Recommend this novel to older teens who are romance fans.”—VOYA

Juliana was born in in New York, New York and grew up in Santa Monica, California. She received a B.A. from Wesleyan University and an M.F.A. in Painting from U.C.L.A. Juliana taught Drawing at Wesleyan University from 2011-2014, during which time she continued to make art and show her work internationally. Juliana began writing fiction in addition to painting in 2009 and her debut YA novel, First There Was Forever, came out in 2015. She currently lives and works in Hollywood with her husband and her dog.
Loading...
or
Not Currently Available for Direct Purchase