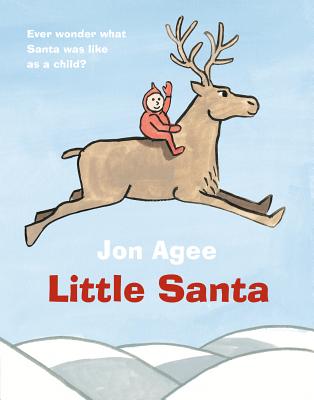 Little Santa board book (Board book)

What was Santa like as a kid? Award-winning author/illustrator Jon Agee brings us the funny, playful answer in this Christmas picture book—now available as a board book.

Little Santa loves the North Pole. The rest of his family? Not so much. So, when they decide to move to Florida, Santa is miserable. Lucky for him, a blizzard foils their plans. The only way out of the house is up the chimney. Up goes Santa, to look for help, and along the way, he meets a reindeer and a large group of elves, who are more than eager to join in the rescue!

With the sly humor of Jon Klassen and the read-aloud pleasure of How the Grinch Stole Christmas, the hardcover edition of Little Santa is already on its way to becoming a Christmas classic. Simple, bold illustrations and a smaller trim size make this board book edition the perfect way to share this story with Santa's littlest fans.

Jon Agee is the author/illustrator of many acclaimed books for children, including ALA Notable Books Terrific, Milo's Hat Trick, The Incredible Painting of Felix Clousseau, and of course the original edition of Little Santa. He is also the creator of a series of popular wordplay books, including the IRA-CBC Children's Choice book of palindromes, Go Hang a Salami! I'm a Lasagna Hog! Jon grew up along the Hudson River in Nyack, New York, and went to college at The Cooper Union School of Art in New York City, where he studied painting and filmmaking. Now a full-time author, he lives in San Francisco with his wife, Audrey, and their Havanese puppy, Charlotte.

Praise For Little Santa board book…

An ALA Notable Book
A Booklist Notable Children's Book of 2013

* "His red suit and his smile make little Santa stand out in his glum family, and this amusing story stands out in a similar way as a cheerful, original Christmas tale."—Kirkus, starred review

* "Make it a tradition!"—Booklist, starred review