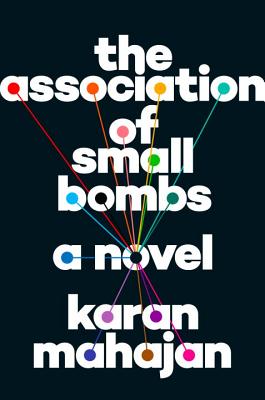 The Association of Small Bombs

"Wonderful. . . . Smart, devastating, unpredictable. . . . I suggest you go out and buy this one. Post haste." --Fiona Maazel, The New York Times Book Review

" Mahajan's] eagerness to go at the bomb from every angle suggests a voracious approach to fiction-making." --The New Yorker

For readers of Mohsin Hamid, Dave Eggers, Arundhati Roy, and Teju Cole, The Association of Small Bombs is an expansive and deeply humane novel that is at once groundbreaking in its empathy, dazzling in its acuity, and ambitious in scope When brothers Tushar and Nakul Khurana, two Delhi schoolboys, pick up their family's television set at a repair shop with their friend Mansoor Ahmed one day in 1996, disaster strikes without warning. A bomb--one of the many "small" bombs that go off seemingly unheralded across the world--detonates in the Delhi marketplace, instantly claiming the lives of the Khurana boys, to the devastation of their parents. Mansoor survives, bearing the physical and psychological effects of the bomb. After a brief stint at university in America, Mansoor returns to Delhi, where his life becomes entangled with the mysterious and charismatic Ayub, a fearless young activist whose own allegiances and beliefs are more malleable than Mansoor could imagine. Woven among the story of the Khuranas and the Ahmeds is the gripping tale of Shockie, a Kashmiri bomb maker who has forsaken his own life for the independence of his homeland. Karan Mahajan writes brilliantly about the effects of terrorism on victims and perpetrators, proving himself to be one of the most provocative and dynamic novelists of his generation.

Karan Mahajan was born in 1984 and grew up in New Delhi, India. His first novel, Family Planning, was a finalist for the Dylan Thomas Prize and published in nine countries. His writing has appeared in The New York Times, The Wall Street Journal, NPR's All Things Considered, The New Yorker online, The Believer, The Paris Review Daily, and Bookforum. A graduate of Stanford University and the Michener Center for Writers, he lives in Austin, Texas.
Loading...
or
Not Currently Available for Direct Purchase