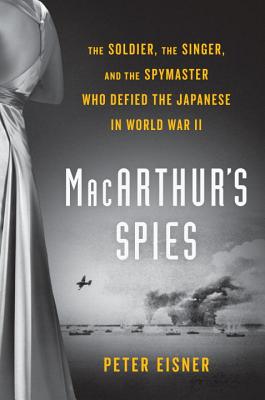 The Soldier, the Singer, and the Spymaster Who Defied the Japanese in World War II

"MacArthur's Spies reads like Casablanca set in the Pacific, filled with brave and daring characters caught up in the intrigue of war—and the best part is that it's all true!" —Tom Maier, author of Masters of Sex

A thrilling story of espionage, daring and deception set in the exotic landscape of occupied Manila during World War II.

On January 2, 1942, Japanese troops marched into Manila unopposed by U.S. forces. Manila was a strategic port, a romantic American outpost and a jewel of a city. Tokyo saw its conquest of the Philippines as the key in its plan to control all of Asia, including Australia. Thousands of soldiers surrendered and were sent on the notorious eighty-mile Bataan Death March. But thousands of other Filipinos and Americans refused to surrender and hid in the Luzon hills above Bataan and Manila. MacArthur's Spies is the story of three of them, and how they successfully foiled the Japanese for more than two years, sabotaging Japanese efforts and preparing the way for MacArthur’s return.

From a jungle hideout, Colonel John Boone, an enlisted American soldier, led an insurgent force of Filipino fighters who infiltrated Manila as workers and servants to stage demolitions and attacks.

“Chick” Parsons, an American businessman, polo player, and expatriate in Manila, was also a U.S. Navy intelligence officer. He escaped in the guise of a Panamanian diplomat, and returned as MacArthur’s spymaster, coordinating the guerrilla efforts with the planned Allied invasion.

And, finally, there was Claire Phillips, an itinerant American torch singer with many names and almost as many husbands. Her nightclub in Manila served as a cover for supplying food to Americans in the hills and to thousands of prisoners of war. She and the men and women who worked with her gathered information from the collaborating Filipino businessmen; the homesick, English-speaking  Japanese officers; and the spies who mingled in the crowd.

Readers of Alan Furst and Ben Macintyre—and anyone who loves Casablanca—will relish this true tale of heroism when it counted the most.

Praise For MacArthur's Spies: The Soldier, the Singer, and the Spymaster Who Defied the Japanese in World War II…

“It’s a barn-burner of a story, a fight for love and glory, and Eisner’s impeccable research and reporting bring it to life. Here’s looking at you, Claire.”
—Washington Post

“A well-researched, entertaining, and informative look at the resistance to the Japanese occupation.”
—Publishers Weekly

“Peter Eisner does a masterful job of telling the colorful, largely unknown story of an intrepid array of Americans in the Philippines who evaded capture by the Japanese in World War II and helped mount a powerful resistance movement against them. A sultry nightclub owner in Manila and a businessman who used his cover as a Central American consul to spy on the Japanese are just two members of a fabulous cast of characters that could have come straight from a Graham Greene novel.”
--Lynne Olson, author of Citizens of London and Last Hope Island

"MacArthur's Spies reads like Casablanca set in the Pacific, filled with brave and daring characters caught up in the intrigue of war—and the best part is that it's all true! With great historical detective work and narrative grace, Peter Eisner opens our eyes to the amazing story of Claire Phillips. Inside her shadowy Manila nightclub, Claire masterminded a spy ring that outfoxed Japanese invaders and helped America win World War II when all seemed lost. This is a spy story about a remarkable woman who, through her own cunning and considerable charm with the men in her life, manages to survive—a triumph of the human spirit."
—Thomas Maier, author of Masters of Sex and When Lions Roar: The Churchills and the Kennedys.

“Peter Eisner has mastered the art of bringing history alive by finding-and telling-the story within the story.  He has done it again with this thrilling tale of deception, romance, and physical endurance set against the backdrop of World War II in the Pacific.  Memorable characters, exotic locales, realistic dialogue, extraordinarily high stakes—this book has the ingredients of a great spy novel.  Plus: it all actually happened.”
--Michael Dobbs, author of Six Months in 1945: From World War to Cold War and One Minute to Midnight

Praise for The Freedom Line:

"Exciting and highly readable . . . Written with an eye for characterization and vivid detail and a sense of immediacy and moral commitment. . . Eisner has given us an exhilarating account of harrowing danger, betrayal and heroism, one with a hint of romance and with the ultimate triumph of freedom and justice."
—The Washington Post

Peter Eisner, a veteran foreign correspondent and political editor, has worked at the Washington Post, Newsday, and the Associated Press. Eisner is the former managing director of the Center for Public Integrity. He is the author or coauthor of five previous books, including The Pope’s Last Crusade, The Italian Letter, and The Freedom Line, winner of the Christopher Award.
Loading...
or
Not Currently Available for Direct Purchase