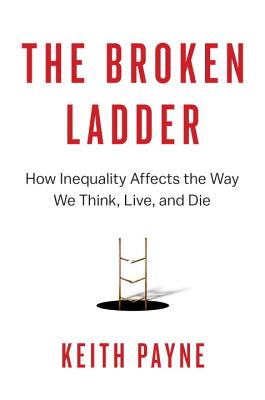 How Inequality Affects the Way We Think, Live, and Die

“The Broken Ladder is an important, timely, and beautifully written account of how inequality affects us all.” —Adam Alter, New York Times bestselling author of Irresistible and Drunk Tank Pink

A timely examination by a leading scientist of the physical, psychological, and moral effects of inequality.

The levels of inequality in the world today are on a scale that have not been seen in our lifetimes, yet the disparity between rich and poor has ramifications that extend far beyond mere financial means. In The Broken Ladder psychologist Keith Payne examines how inequality divides us not just economically; it also has profound consequences for how we think, how we respond to stress, how our immune systems function, and even how we view moral concepts such as justice and fairness.

Research in psychology, neuroscience, and behavioral economics has not only revealed important new insights into how inequality changes people in predictable ways but also provided a corrective to the flawed view of poverty as being the result of individual character failings. Among modern developed societies, inequality is not primarily a matter of the actual amount of money people have. It is, rather, people's sense of where they stand in relation to others. Feeling poor matters—not just being poor. Regardless of their average incomes, countries or states with greater levels of income inequality have much higher rates of all the social maladies we associate with poverty, including lower than average life expectancies, serious health problems, mental illness, and crime.

The Broken Ladder explores such issues as why women in poor societies often have more children, and why they have them at a younger age; why there is little trust among the working class in the prudence of investing for the future; why people's perception of their social status affects their political beliefs and leads to greater political divisions; how poverty raises stress levels as effectively as actual physical threats; how inequality in the workplace affects performance; and why unequal societies tend to become more religious. Understanding how inequality shapes our world can help us better understand what drives ideological divides, why high inequality makes the middle class feel left behind, and how to disconnect from the endless treadmill of social comparison.

Praise For The Broken Ladder: How Inequality Affects the Way We Think, Live, and Die…

"A persuasive and highly readable account of how rising inequality, and not just absolute poverty, is undermining our politics, social cohesion, long term prosperity, and general well-being."
—President Barack Obama

“Brilliant. . . . an important, fascinating read arguing that inequality creates a public health crisis in America. . . . Payne challenges a common perception that the real problem isn’t inequality but poverty, and he’s persuasive that societies are shaped not just by disadvantage at the bottom but also by inequality across the spectrum. . . . So much of the national conversation now is focused on President Trump, for understandable reasons. But I suspect that he is a symptom as well as a cause, and that to uncover the root of our national dysfunctions we must go deeper than politics, deeper than poverty, deeper than demagoguery, and confront the inequality that is America today.”
—Nicholas Kristof, New York Times

“Authoritative, thought provoking, accessible and well worth a spot on your summer reading list. . . . Payne embraces the egalitarian view that inequality of income is problem in and of itself—economically, morally, politically. . . . Demonstrate[s] how much more interesting and enlightening the inequality debate has become since those early days when it was mostly labor economists debating how much inequality had increased and whether we should blame technology or trade. . . . While we have come to understand that a society can suffer from having either too much inequality or too little, the challenge now is identifying and getting to that sweet spot in between.”
—Steven Pearlstein, The Washington Post

“Keith Payne is intent on showing how the problem of inequality operates within the human mind. . . . Beyond its case studies, the memoir portion of Payne’s book is compelling in its own way, and is a counternarrative to J.D. Vance’s Hillbilly Elegy. The Broken Ladder is a liberal man’s view of his own rise. . . . Payne’s book will make its readers pause to consider the human condition in more depth.”
—Nancy Isenberg, The American Scholar

“Drawing on experimental psychology, Payne argues that the amount of money you have is not the main determinant of well-being; what matters is how you feel about it. The problem of inequality is relational, not economic. Poverty unquestionably harms health, encourages bad decisions and creates instability. But the key message of Payne’s book is that people who are not deprived may act as if they are—because they feel relatively poor.”
—Aaron Reeves, Nature

“An important and disturbing book to tell us how inequality is affecting Americans psychologically. . . . Payne, who grew up poor in Kentucky hill country, felt the injuries of class as a child. . . . As an adult, he is helping to create a new ‘science of inequality,’ by studying such subjects as the connection between social status and stress . . . and income inequality and life expectancy. . . . It is sobering stuff, and it should make us think about the hidden costs of growing income inequality—and about the messages society is sending to people about where they fit in.”
—The National Book Review

“Relying on dozens of experimental studies, which he describes in vivid and graspable narratives, Payne shows that even in a generally wealthy society, feeling poor relative to your neighbors will harm your health, impair your ability to make long-term plans, push you toward conspiracy theories and ultimately cause you to die sooner than you otherwise would. On measures of well-being, residents of the United States fare worse than residents of countries like Canada, Sweden or Japan, all of which are less wealthy but more equal. . . . Payne wants us to start ‘building a flatter ladder’ between rich and poor and ‘get better at living amid its rungs.’”
—America Magazine

“Payne’s writing on how inequality changes people’s decisions, beliefs, and even their health is eye-opening and efficient. . . . The Broken Ladder is a clear and useful book about the gap between the society we have and a society we want. It’s an important step toward understanding how these complicated issues affect our country—alongside books like Matthew Desmond’s Evicted, which takes a more narrative approach to the issue, and Per Molander’s The Anatomy of Inequality, which analyzes it from an economic point of view. Inequality can seem intractable, but these writers are steering us in the right direction. It is no doubt difficult to situate the problem of inequality in such a fraught political landscape, with a President so intent on hurting so many, but keeping an eye on a long-term vision of a more egalitarian society is necessary, too. Keeping Payne’s book on your bedside table is a good place to start.”
—Bradley Babendir, The Rumpus

“Inequality is like gravity in that it is a weighty and pervasive unseen force in daily life. . . . Payne makes a compelling case here for the invisible hand of inequality as a major factor in life—with predictable effects on life expectancy and social behavior—and an influence on political leanings. . . . [A]n engaging interdisciplinary blend of psychology, sociology, and economics that will also appeal to avid readers of politics.”
—Booklist

“In a wide-ranging exploration of how we view ourselves in relation to others, Payne shows that ‘the social comparisons we make can alter how we see the world.’ . . . Smartly blending personal observations with recent research in psychology and neuroscience (his own and that of others), he details how our perceived relative position in the scheme of things plays a ‘critical role’ in shaping our biases, habits, and ideas. . . . In revealing vignettes, Payne describes how feelings of inequality help account for our political choices, unhealthy behaviors, racial prejudices, and tendency to seek meaningful patterns. . . . [Payne] provides valuable psychological insights into our daily behaviors.”
—Kirkus Reviews

“The Broken Ladder advances a timely examination by a leading social scientist of the physical, psychological, and moral effects of inequality and the measures that people can take to lessen the harm done by inequality in their own lives.”
—Publishers Weekly

“Keith Payne has written an eye-opening book with profound resonance for the state of our world. We all know that income inequality has dire economic and societal consequences, but The Broken Ladder shows that it has deep psychological impact too, affecting our decision-making, our mood and our health. A thoughtful look — and a rallying cry — into the way our environment shapes us all.”
—Susan Cain, co-founder of Quiet Revolution and New York Times bestselling author of Quiet: The Power of Introverts in a World That Can’t Stop Talking

“The Broken Ladder’s examination of the consequences of inequality—of what it is like to be poor and to feel poor—is as profound as it is revelatory. Keith Payne is a lovely, graceful writer. Replete with gems of research studies, insights, and illuminating examples and implications, this book will change the way you think about your world.”
—Sonja Lyubomirsky , Ph.D., professor of psychology at the University of California, Riverside and author of The How of Happiness

“The Broken Ladder is an important, timely, and beautifully written account of how inequality affects us all. Though it surely plagues the poorest and most vulnerable members of society, Keith Payne expertly and engagingly shows that it also touches the wealthy and privileged. Payne marshals the cutting edge in psychology and neuroscience research to explain how inequality influences our political and religious beliefs, how we perform at work, and how we respond to stress and physical threats—and how we can combat its most insidious effects on our lives.”
—Adam Alter, Associate Professor of Marketing at New York University’s Stern School Business, and New York Times Bestselling author of Irresistible and Drunk Tank Pink

Keith Payne is a professor of psychology at the University of North Carolina at Chapel Hill and an international leader in the psychology of inequality and discrimination. His research has been featured in The Atlantic and The New York Times, and on NPR, and he has written for Scientific American and Psychology Today.
Loading...
or
Not Currently Available for Direct Purchase