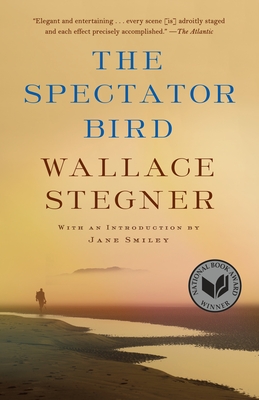 This tour-de-force of American literature and a winner of the National Book Award is a profound, intimate, affecting novel from one of the most esteemed literary minds of the last century and a beloved chronicler of the West.

Joe Allston is a cantankerous, retired literary agent who is, in his own words, "just killing time until time gets around to killing me." His parents and his only son are long dead, leaving him with neither ancestors nor descendants, tradition nor ties. His job, trafficking the talent of others, has not been his choice. He has passed through life as a spectator, before retreating to the woods of California in the 1970s with only his wife, Ruth, by his side. When an unexpected postcard from a long-lost friend arrives, Allston returns to the journals of a trip he has taken years before, a journey to his mother's birth­place where he once sought a link with his past. Uncovering this history floods Allston with memories, both grotesque and poignant, and finally vindicates him of his past and lays bare that Joe Allston has never been quite spectator enough.

Praise For The Spectator Bird…

“Wallace Stegner’s is one of the most beguiling voices of [the] era, and The Spectator Bird is one of his most appealing works.”—Jane Smiley, from the introduction

“A fabulously written account of regret, memory and the subtleties and challenges of a long successful marriage. Stegner deals with the dual threads of the novel with aplomb.... A thoughtful, crystalline book.” —Matthew Spencer, The Guardian

“There are rivers undammed, desert vistas unspoiled and forests uncut in the wondrous West because of his pen.” —Timothy Egan, The New York Times

Wallace Stegner (1909-1993) was the author of, among other novels, Remembering Laughter, 1937; The Big Rock Candy Mountain, 1943; Joe Hill, 1950; All the Little Live Things, 1967 (Commonwealth Club Gold Medal); A Shooting Star, 1961; Angle of Repose, 1971 (Pulitzer Prize); The Spectator Bird, 1976 (National Book Award, 1977); Recapitulation, 1979; and Crossing to Safety, 1987. His nonfiction includes Beyond the Hundredth Meridian, 1954; Wolf Willow, 1963; The Sound of Mountain Water (essays), 1969; The Uneasy Chair: A Biography of Bernard DeVoto, 1974; and Where the Bluebird Sings to the Lemonade Springs: Living and Writing in the West (1992). Three of his short stories have won O. Henry Prizes, and in 1980 he received the Robert Kirsch Award from the Los Angeles Times for his lifetime literary achievements. His Collected Stories was published in 1990.
Loading...
or support indie stores by buying on