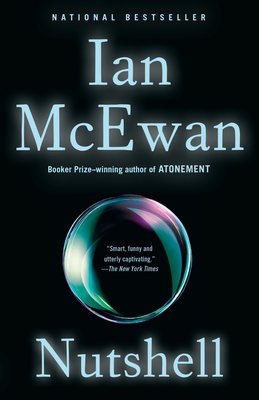 NATIONAL BESTSELLER • A “suspenseful, dazzlingly clever and gravely profound” (The Washington Post) novel that brilliantly recasts Shakespeare and lends new weight to the age-old question of Hamlet's hesitation, from the Booker Prize winner and bestselling author of Atonement.

As Trudy’s unborn son listens, bound within her body, to his mother and his uncle’s murderous plans, he gives us a truly new perspective on our world, seen from the confines of his.

“More brilliant than it has any right to be.... Suspenseful, dazzlingly clever and gravely profound.” —The Washington Post

“Gorgeous.... Offer[s] the reader a voice both distinctive and engaging.... Rife with wordplay, social commentary, hilarity, and suspense. . . . Hats off to Ian McEwan.” —The Boston Globe

“McEwan is a literary pointillist—in control of each keystroke, creating small, precise masterpieces that delight with their linguistic prowess.... [A] daring thriller.” —O, The Oprah Magazine

“Brilliant.... This novel is a thing of joy.” —The Economist

“Nutshell is an orb, a Venetian glass paperweight of a book.... It is a consciously late, deliberately elegiac masterpiece, a calling together of everything McEwan has learned and knows about his art.” —The Guardian (London)

“Nutshell belongs to that dark tributary of McEwan novels which includes The Cement Garden, The Innocent and Booker-winner Amsterdam—black comedies aswirl with macabre thoughts and foul deeds. It sees McEwan at his most playful.... [Readers should] applaud it for its beauty, precision and inventiveness.” —Minneapolis Star Tribune

“A book pulsing with hilarious and brainy brio.... He simultaneously spoofs crime fiction and finds a novel mouthpiece for a mordantly entertaining and exhilaratingly intelligent commentary on the modern world.” —The Sunday Times (London)

“[A] tour de force.... A slim, clever thriller with the grand good fortune of being written by the inimitable McEwan.” —Buffalo News

“Fiercely intelligent.... At once playful and deadly serious.... One of McEwan’s hardest to categorize works, and all the more interesting for it.” —The Times (London)

“A creative gamble that pays off brilliantly.... Witty and gently tragic, this short yet utterly bewitching novel is an ode to humanity’s beauty, selfishness and inextinguishable longing.” —Mail on Sunday

IAN MCEWAN is the critically acclaimed author of seventeen novels and two short story collections. His first published work, a collection of short stories, First Love, Last Rites, won the Somerset Maugham Award. His novels include The Child in Time, which won the 1987 Whitbread Novel of the Year Award; The Cement Garden; Enduring Love; Amsterdam, which won the 1998 Booker Prize; Atonement; Saturday; On Chesil Beach; Solar; Sweet Tooth; The Children Act; Nutshell; and Machines Like Me, which was a number-one bestseller. Atonement, Enduring Love, The Children Act and On Chesil Beach have all been adapted for the big screen.