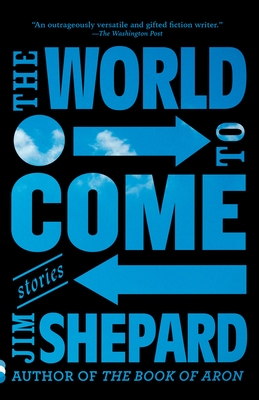 The World to Come

Bursting with wicked humor and driven by an incomparable understanding of what it means to be human, The World to Come is the inimitable work of “the most ambitious story writer in America” (The Daily Beast).

Shepard traverses both borders and centuries, seamlessly inhabiting a multitude of disparate men and women, and giving voice to visionaries, pioneers, and secret misfits—from nineteenth-century explorers departing on one of the Arctic’s most nightmarish expeditions to twentieth-century American military wives maintaining hope at home. Shepard’s characters confront everything from the emotional pitfalls of everyday life to colossal catastrophes, battling natural forces, the hazards of new technology, and their own implacable shortcomings.

"[Shepard] has a knack for compressing a novel’s worth of life into 30 or 40 pages.” —The Boston Globe

Praise For The World to Come: Stories…

“Jim Shepard [is] an outrageously versatile and gifted fiction writer.” —The Washington Post

“[Shepard’s] stories come bearing enough unimpeachable detail to ensure they never sink into the mush of a half-baked world. . . . [His] approach gives the individual stories heft and [his] collections a dizzying range.” —The New York Times Book Review

“An astonishingly powerful demonstration of fiction’s capacity to transport us across time and space. . . . An absolute pleasure to read.” —The Christian Science Monitor

Jim Shepard is the author of four previous collections, including Like You’d Understand, Anyway, which won The Story Prize and was a finalist for the National Book Award, and his short fiction has often been selected for Best American Short Stories and The PEN/O. Henry Prize Stories. The most recent of his seven novels, The Book of Aron, won the PEN/New England Award, the Sophie Brody Medal for achievement in Jewish literature, the Harold U. Ribalow Book Prize for Jewish literature, and the Clark Fiction Prize.  He lives in Williamstown, Massachusetts with his wife, the writer Karen Shepard, his three children and three beagles, and he teaches at Williams College.
Loading...
or support indie stores by buying on