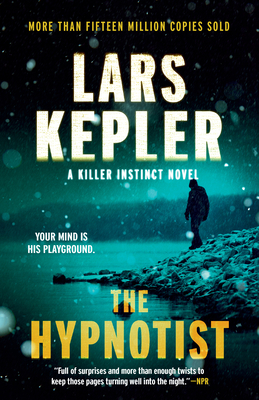 “Detective Inspector Joona Linna takes on a bizarre murder case when a young Swedish family is found brutally slain in their own home. Questioning the surviving witness is not an option, as the young boy's life hangs by a thread. What Linna needs is a hypnotist. Erik Maria Bark is that man, but the problem is he gave up practicing 10 years ago after a tragic accident. The detective won't take no for an answer, so Erik puts the boy in a trance. What happens next won't just threaten everything Erik has managed to rebuild, it will tear families apart, turn friends into bitter enemies, and rob Erik of Benjamin, his only son. Gritty, fast-paced, and impossible to put down.”
— Paula Longhurst, The King's English, Salt Lake City, UT
View the List

The first of the internationally bestselling Killer Instinct series: a triple murder, the one surviving witness—a boy with no memory of what happened—and the hypnotist hired to help uncover the truth.

“Full of surprises and more than enough twists to keep those pages turning well into the night.” —NPR

The police are desperate for information on the triple homicide. Detective Joona Linna enlists the help of hypnotist Erik Maria Bark. But when Bark unlocks the secrets in the boy’s memory, he triggers a terrifying chain of events that will put all their lives in jeopardy.

Praise For The Hypnotist: A novel (Killer Instinct #1)…

“Full of surprises and more than enough twists to keep those pages turning well into the night.” —NPR

“A gripping series of twists and turns.... A natural successor to the Stieg Larsson series.” —Parade

LARS KEPLER is the pseudonym of the critically acclaimed husband and wife team Alexandra Coelho Ahndoril and Alexander Ahndoril. Their internationally best-selling Joona Linna series has sold more than twelve million copies in forty languages. The Ahndorils were both established writers before they adopted the pen name Lars Kepler, and have each published several acclaimed novels. They live in Stockholm, Sweden. Translated by Neil Smith (acclaimed translator of Jo Nesbo).
Loading...
or support indie stores by buying on