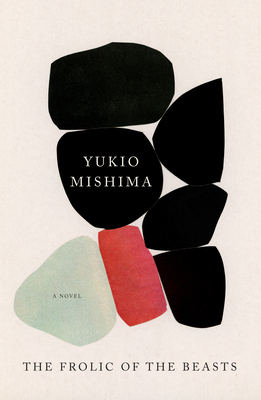 The Frolic of the Beasts (Vintage International)

Translated into English for the first time, a gripping short novel about an affair gone wrong, from the acclaimed Japanese author, Yukio Mishima.

Set in rural Japan shortly after World War II, The Frolic of the Beasts tells the story of a strange and utterly absorbing love triangle between a former university student, Kōji; his would-be mentor, the eminent literary critic Ippei Kusakado; and Ippei's beautiful, enigmatic wife, Yūko. When brought face-to-face with one of Ippei's many marital indiscretions, Kōji finds his growing desire for Yūko
compels him to action in a way that changes all three of their lives profoundly. Originally published in 1961 and now available in English for the first time, The Frolic of the Beasts is a haunting examination of the various guises we assume throughout our lives, and a tale of psychological self-entrapment, seduction, and murder.

Praise For The Frolic of the Beasts (Vintage International)…

One of LitHub's Best Translated Novels of the Decade

“Mishima is a giant. . . . One of the most acclaimed writers of the 20th century. . . . The uniquely askew relationships at the center of the story mean that its most riveting scenes are well and truly riveting; unforgettable, even.” —The New York Times Book Review

“A compelling tale of love and violence. . . . Mishima is a magnificent and important storyteller. . . Admirers of the enigmatic Japanese master have reason to rejoice. Those still unfamiliar with his work might very well have a new entryway to one of the most vital—and troubling—literary voices of the 20th century. . . . By the time we reach the end, Mishima’s twisty timeline pays huge dividends. A powerful epilogue ties a neat ribbon around the plot.” —The Washington Post

“[A] luridly propulsive novel. . . . This disturbing book is a masterful look into the ‘very instant when the truth of perverse human nature begins to shine.’ . . . With Mishima’s baroque, beautiful prose hinting at depravity on every page.” —Publishers Weekly (starred review)

“[A] psychologically complex novel finally available in a honed translation by Andrew Clare. . . . Mishima, an extraordinary literary talent, was to the last a consummate multifaceted performance artist, profoundly aware of the pressing momentum of time.” —The Times Literary Supplement

“Classic Mishima terrain. . . . A stimulating read and a welcome addition to the canon of Mishima translations.” —The Japan Times

“Masterful. . . . A tale of lust, violence and acceptance, the story stands as another example of [Mishima’s] genius.” —Shelf Awareness

"The kind of book you scribble all over in excitement because every line is so brilliant." —Chicago Review of Books

“The Frolic of the Beasts has finally been published in English, in a decent translation by Andrew Clare. . . . Mishima was prolific and versatile in a manner reminiscent of a writer like John Updike. In addition to hundreds of short stories and eleven volumes of critical essays, he wrote thirty-five novels and thirteen plays . . . including adaptations from the Noh theater repertory.” —The New York Review of Books

"Representative Mishima. . . . [The Frolic of the Beasts shows] the author’s penchant for meticulously peeling the onion." —The Hudson Review

“A tragic, haunting work from a master.” —The Gazette (Cedar Rapids)

Yukio Mishima was born in Tokyo in 1925. He graduated from Tokyo Imperial University's School of Jurisprudence in 1947. His first published book, The Forest in Full Bloom, appeared in 1944 and he established himself as a major author with Confessions of a Mask (1949). From then until his death he continued to publish novels, short stories, and plays each year. His crowning achievement, the Sea of Fertility tetralogy—which contains the novels Spring Snow (1969), Runaway Horses (1969), The Temple of Dawn (1970), and The Decay of the Angel (1971)—is considered one of the definitive works of twentieth-century Japanese fiction. In 1970, at the age of forty-five and the day after completing the last novel in the Fertility series, Mishima committed seppuku (ritual suicide)—a spectacular death that attracted worldwide attention.
Loading...
or support indie stores by buying on