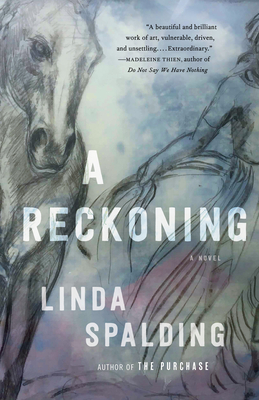 1855, Virginia: the Dickinson farm, run by brothers Benjamin and John, is visited by a Northern abolitionist who secretly distributes compasses, maps, and knives to the people enslaved there. Bry is the first slave to flee, determined to find his mother and daughter already in Canada. His escape inspires a dozen others.

Without their labor, the farm falters and is forfeited to the bank. John Dickinson, who is also a circuit-riding preacher, gathers his flock into a wagon train to find a new life in the west. But he carries a dangerous secret that compels him to abandon the group at the last minute, and his wife, daughters, and thirteen-year-old son, Martin, must now face life on the trail without him. After a fateful encounter along the way, Martin and Bry will hatch a plot to get Bry safely to Canada, but each member of the family will be irrevocably changed by the journey. Told with astonishing empathy, A Reckoning brilliantly re-creates an America that was: the undefiled beauty of its lands; the grand mix of settlers and Native Americans, blacks and whites; and people leaving one life behind for another they can only just begin to see.

Praise For A Reckoning: A Novel…

“A beautiful and brilliant work of art, vulnerable, driven, and unsettling. . . . Extraordinary.” —Madeleine Thien, author of Do Not Say We Have Nothing

“Brilliant and harrowing. . . . There is something of Mark Twain in this telling and something of Willa Cather, a narrative as ingenious in its mix of points of view as Faulkner's As I Lay Dying.” —Robert Hass, Pulitzer Prize–winning author of Time and Materials

“Excellent. . . . A drama set in the late 1850s as conflicts over slavery and abolition tear apart a Virginia plantation family. . . . Rife with historical detail.” —Publishers Weekly

“Timely, historically sensitive. . . . A literary saga. . . . Explores the ramifications of slavery on the next generation of the Dickinson family. . . . Spectacularly described.” —Booklist

“An engrossing, deftly crafted narrative. . . . Taking up the lives of the Dickinson family from her last historical novel, Spalding follows the misfortunes of patriarch Daniel’s sons.” —Kirkus Reviews

Linda Spalding was born in Kansas and lived in Mexico and Hawaii before immigrating to Canada in 1982. She is the author of four critically acclaimed novels, The Purchase (awarded Canada's Governor General's Literary Award), Daughters of Captain Cook, The Paper Wife, and (with her daughter Esta) Mere. Her nonfiction includes A Dark Place in the Jungle, Riska: Memories of a Dayak Girlhood, and Who Named the Knife. In 2003 Spalding received the Harbourfront Festival Prize for her contribution to the Canadian literary community. She lives in Toronto, where she is an editor of Brick magazine.
Loading...
or
Not Currently Available for Direct Purchase