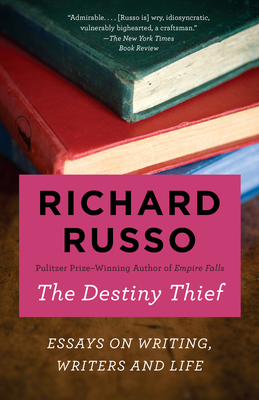 Essays on Writing, Writers and Life

“I’ve written a lot about destiny in my fiction,” admits Richard Russo, “not because I understand it, but because I’d like to.” In the first of these eleven remarkable essays, Russo shares the story of his onetime fiction workshop classmate who, of the two of them, was considered the class star, bound for literary glory. Yet it was Russo who emerged as a major writer. How, he wonders, did he manage to steal his classmate’s destiny? What twists of talent and fate determine a would-be writer’s path?

In each of the pieces collected here, Russo considers the unexpected turns of the creative life. From his grandfather’s years cutting gloves to his own teenage dreams of rock stardom; from his first college teaching jobs to his dazzling reads of Dickens and Twain; from the roots of his famous novels to his journey accompanying a dear friend—the writer Jennifer Finney Boylan—as she pursued gender reassignment surgery, The Destiny Thief powerfully reveals the inner workings of one of America’s most beloved authors.

Praise For The Destiny Thief: Essays on Writing, Writers and Life…

“As much fun to read as his best-selling novels. . . . At times funny, always touching. . . . If you want to be a writer this is a must book to read.” —Albany Times Union

“Captivating. . . . Generous-hearted. . . . Fully display[s] Russo's trademark warmth and wit. . . . Puzzles with the mysteries of what good writing is and what good living is.” —BookPage

“A heartfelt exploration of [Russo’s] life as a writer.” —PopSugar

“More than a few wise reflections on the craft of writing.” —Southern Living

“A remarkable and insightful exploration into the mind of a wonderful writer.” —Book Reporter

“All-encompassing. . . . Anyone in search of an eye-opening series of essays by a distinguished writer about writing and the writing life need look no further.” —The National Book Review

“Certain to please anyone familiar with his short fiction and novels. . . . Readers seeking a deeply insightful record of the creative process and the life guiding it will find resonance here.” —Library Journal (starred review)

“[A] splendid collection. . . . These are wise, personal pieces, and readers get to know the author as a comforting, funny, and welcoming guy.” —Kirkus Reviews

“Brilliant. . . . Scholarly yet accessible. . . . Russo lets his readers behind the curtain to divulge the myriad sources of his profound wisdom and boundless generosity as both writer and teacher.” —Booklist

Richard Russo is the author of eight novels, most recently Everybody’s Fool and That Old Cape Magic; two collections of stories; and the memoir Elsewhere. In 2002 he received the Pulitzer Prize for Empire Falls, which like Nobody’s Fool was adapted to film, in a multiple-award-winning HBO miniseries; in 2016 he was given the Indie Champion Award by the American Booksellers Association; and in 2017 he received France’s Grand Prix de Littérature Américaine. He lives in Port­land, Maine.
Loading...
or
Not Currently Available for Direct Purchase