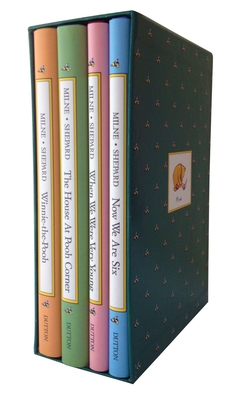 Since 1926, Winnie-the-Pooh and his friends—Piglet, Owl, Tigger, and the ever doleful Eeyore—have endured as the unforgettable creations of A.A. Milne, who wrote this book for his son, Christopher Robin, and Ernest H. Shepard, who lovingly gave Pooh and his companions shape.

This box set contains four hardcover books: the two original Pooh novels, Winnie-the-Pooh and The House at Pooh Corner, and Milne's two poetry collections, Now We Are Six and When We Were Very Young, which features the very first appearance of Pooh.

A. A. Milne was born in England in 1882, the third and youngest son of London schoolteachers. As a boy he wrote verses, parodies, and short humorous pieces for his school’s paper. He went on to study at Cambridge. In 1903 he left school to write. Before long he was supporting himself on his earnings, and became an editor at Punch magazine. In 1913 he married Dorothy de Selincourt. He began his military service in 1915 in Europe. During this time he wrote three plays, all of which were produced on the London stage. Christopher Robin Milne was born in 1920. It was Christopher’s toy bear, pig, donkey, tiger, and kangaroo that became the inspiration for the famous Pooh books. A. A. Milne wrote more plays, a novel, his autobiography, and political nonfiction, although he is best remembered for Winnie-the-Pooh, The House at Pooh Corner, When We Were Very Young, and Now We Are Six. Milne died in 1956.
Loading...
or support indie stores by buying on