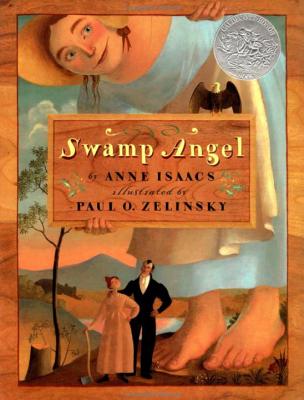 Working in an American primitive style animated by the humor and storytelling genius for which he is renowned, Caldecott Winner artist Paul O. Zelinsky puts oils to cherry and maple for this tall-tale competition between a Tennessee woods-woman extraordinaire and a hungry, fearsome bear.Thundering Tarnation has a bottomless appetite for settler's grub. When word goes out about a competition to hunt this four-legged forest of stubble, a young woman, second to none in buckskin bravery, signs up. "How about baking a pie, Angel?" the other hunters taunt. "I aim to," says Swamp Angel. "A bear pie."What follows is as witty a round of roughhousing as ever jostled the ranks of Americana. Anne Isaacs' original text unfolds in a crackling combination of irony, exaggeration, and bold image-making. Zelinsky's paintings respond with deft yet hilarious expressions, rhythmic shapes, and a sense of monumental motion, as benefits a heroine who can wield a tornado like a lasso, drink a lake dry, and snore down a forest. In the course of these grand shenanigans, the Great Smoky Mountains are stirred up, Montana's short-grass prairie laid down, and Thundering Tarnation's fate proves to have no less a reach than the starry heavens.Swamp Angel marks the debut of a promising new storyteller and adds to the tall-tale traditions a pictorial counterpart that will entertain and endure for a long time to come.