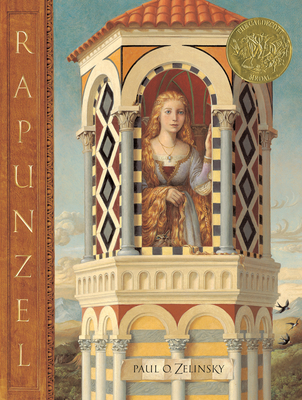 Surely among the most original and gifted of children's book illustrators, Paul O. Zelinsky has once again with unmatched emotional authority, control of space, and narrativecapability brought forth a unique vision for an age-old tale. Few artists at work today can touch the level at which his paintings tell a story and exert their hold.

Zelinsky's retelling of Rapunzel reaches back beyond the Grimms to a late-seventeenth-century French tale by Mlle. la Force, who based hers on the Neapolitan tale Petrosinella in a collection popular at the time. The artist understands the story's fundamentals to be about possessiveness, confinement, and separation, rather than about punishment and deprivation. Thus the tower the sorceress gives Rapunzel here is not a desolate, barren structure of denial but one of esoteric beauty on the outside and physical luxury within. And the world the artist creates through the elements in his paintings the palette, control of light, landscape, characters, architecture,interiors, costumes speaks to us not of an ugly witch who cruelly imprisons a beautiful young girl, but of a mother figure who powerfully resists her child's inevitable growth, and of a young woman and man who must struggle in the wilderness for the self-reliance that is the true beginningof their adulthood.

As ever, and yet always somehow in newly arresting fashion, Paul O. Zelinsky's work thrillingly shows us the events of the story while guiding us beyond them to the truths that have made it endure.

Paul Zelinsky was born in Evanston, Illinois. He attended Yale University, where he took a course with Maurice Sendak, which later inspired him to pursue a career in children's books. Afterwards he received a graduate degree in painting from Tyler School of Art, in Philadelphia and Rome. Paul Zelinsky lives in New York with his wife, Deborah, and the younger of their two daughters.
Loading...
or support indie stores by buying on