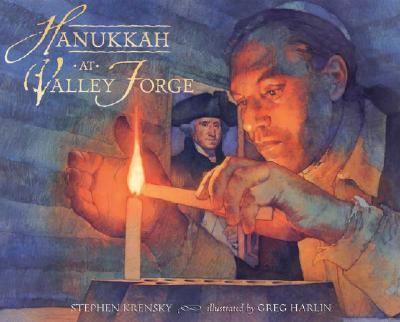 A soldier tells George Washington the miraculous story of how a ragtag army of Jewish soldiers defeated a much larger force of powerful Greeks, a tale that provides just the kind of inspiration the General needs. ?Quietly beautiful watercolor illustrations draw a visual distinction between the frigid blue Pennsylvania night and the golden light of ancient Israel, which is further reflected in the warm glow of the Hanukkah candles.? ?School Library Journal


Praise For Hanukkah at Valley Forge…

"The presence of Jews in the American Revolution is the subject of this fictional encounter between General George Washington and a Polish immigrant fighting with the Continental Army. Likening the Jews’ struggle and ultimate triumph against a powerful oppressor to the American fight for independence provides a bridge between these two men and broadens the scope of the tale. An author’s note details the historical facts upon which this anecdote is based, providing an interesting perspective through which to view a familiar holiday story." —School Library Journal

"I did not have the kind of childhood most people would choose to write about. It was happy and uneventful, with only the occasional bump in the night to keep me on my toes. In my spare time, however, I often imagined myself in various stories -- as Mighty Mouse, Robin Hood, Popeye or Superman. "I always liked to make up stories, especially lying in bed at night before I fell asleep. "It was not until I was twenty that I actually took up ceative writing. One of my favorite parts of the process was imagining myself in various characters' shoes, even if those characters - dragons for example - didn't wear shoes at all. A year later, in 1975, I graduated from Hamilton College and began a six-month internship at the "New York Times Book Review." "Since then I have been a full-time writer for children. I married my wife, Joan, in 1984, and we settled in my hometown of Lexington, Massachusetts, where we live with our two sons, Andrew and Peter. "When I feel like I've spent enough time hunched over my computer, I like to play soccer and softball, and read books written by other people." copyright (c) 2000 by Penguin Putnam Books for Young Readers. All rights reserved.
Loading...
or
Not Currently Available for Direct Purchase