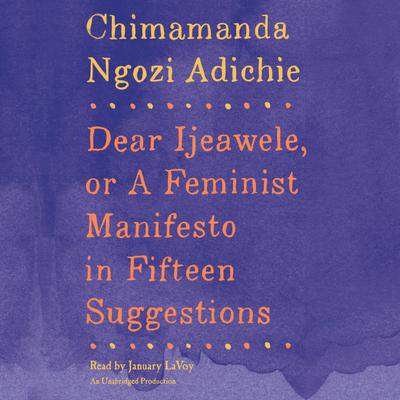 From the best-selling author of Americanah and We Should All Be Feminists comes a powerful new statement about feminism today--written as a letter to a friend.

A few years ago, Chimamanda Ngozi Adichie received a letter from a dear friend from childhood, asking her how to raise her baby girl as a feminist. Dear Ijeawele is Adichie's letter of response.
Here are fifteen invaluable suggestions--compelling, direct, wryly funny, and perceptive--for how to empower a daughter to become a strong, independent woman. From encouraging her to choose a helicopter, and not only a doll, as a toy if she so desires; having open conversations with her about clothes, makeup, and sexuality; debunking the myth that women are somehow biologically arranged to be in the kitchen making dinner, and that men can "allow" women to have full careers, Dear Ijeawele goes right to the heart of sexual politics in the twenty-first century. It will start a new and urgently needed conversation about what it really means to be a woman today.

CHIMAMANDA NGOZI ADICHIE's work has appeared in numerous publications, including The New Yorker and Granta. She is the author of the novels Purple Hibiscus; Half of a Yellow Sun, which won the Orange Prize; Americanah, which won the NBCC Award and was a New York Times, Washington Post, Chicago Tribune, and Entertainment Weekly Best Book of the Year; the story collection The Thing Around Your Neck; and the essay We Should All Be Feminists. A recipient of a MacArthur Fellowship, she divides her time between the United States and Nigeria.