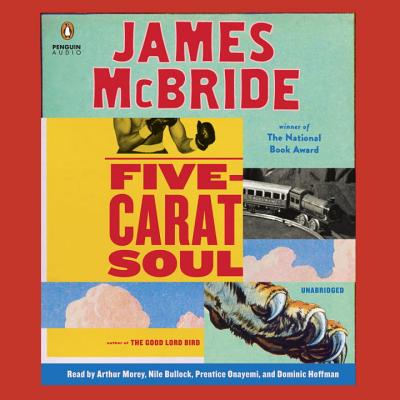 “Sometimes after I've read a great book by an author, I judge. When I picked up a copy of James McBride's new collection of stories, Five-Carat Soul, I was prepared to be disappointed; how could he top The Good Lord Bird? Was I ever surprised, in the best way possible! These stories have all the magnificent qualities of his National Book Award-winning novel: quirky, poignant, and hilarious characters amid myriad situations in life, and humanity at its most human presented in beautiful writing. A couple of multi-story combinations read like novellas, and satisfied my craving to know more about the most interesting of the characters. McBride has set the bar high once again.”
— Mamie Potter, Quail Ridge Books, Raleigh, NC
View the List

“These stories have a beating heart. With present voices and urgent pleas, James McBride dissects the dynamics of power and station. Each story is a keen call, an examination of who and where we are and how we got there. Whether we are young black boys, old Jewish men, little girls at the gates of the afterlife, lions, or the wind, McBride is writing breath and blood and visceral life into our stories.”
— Anne Hensley, Bookbug, Kalamazoo, MI
View the List

The stories in Five-Carat Soul—none of them ever published before—spring from the place where identity, humanity, and history converge. They’re funny and poignant, insightful and unpredictable, imaginative and authentic—all told with McBride’s unrivaled storytelling skill and meticulous eye for character and detail. McBride explores the ways we learn from the world and the people around us. An antiques dealer discovers that a legendary toy commissioned by Civil War General Robert E. Lee now sits in the home of a black minister in Queens. Five strangers find themselves thrown together and face unexpected judgment. An American president draws inspiration from a conversation he overhears in a stable. And members of The Five-Carat Soul Bottom Bone Band recount stories from their own messy and hilarious lives.

As McBride did in his National Book award-winning The Good Lord Bird and his bestselling The Color of Water, he writes with humor and insight about how we struggle to understand who we are in a world we don’t fully comprehend. The result is a surprising, perceptive, and evocative collection of stories that is also a moving exploration of our human condition.

“Brash, daring and defiantly original... [these] stories are bound to stay with readers for a very long time.” —NPR

“The author of the National Book Award-winning novel The Good Lord Bird possesses a biting wit, but disarms it with his calm, plainspoken style... A consummate entertainer, McBride has the comic energy and antic spirit of Richard Pryor.” —Chicago Tribune

“If there’s a mode in which McBride can’t write brilliantly, he has yet to prove it.” —Vulture

“The characters are disparate, but McBride is such an agile writer that each voice feels authentic and somehow familiar. Taken together the stories speak, if not directly to one another, to a greater humanity and wisdom we all desire... These are stories of and from the soul.” —Minneapolis Star-Tribune

“Five-Carat Soul by James McBride covers a lot of ground, all of it unpredictable, exhilarating, and, often, hilarious. The short stories bounce from one unlikely protagonist to the next ... I loved these stories individually; all together they make for a wild and utterly delightful ride.” —BuzzFeed

“The short stories in this collection from National Book Award winner James McBride (The Good Lord Bird) range widely, from the Civil War to the Vietnam War and from the animal world to a toy train set, but all are poignant, imaginative, and 'literary' in the best sense of the word.” —Christian Science Monitor

“McBride proves once again that he is a master conjurer of African Americana with his new book of charmed, imaginative short stories... [He] lets his sense of whimsy run wild in this collection... the results once again are funny, strange and touching.” —Seattle Times

“McBride is one of this country’s best writers, and that has never been more apparent than here, in his first short story collection... McBride’s writing practically shimmers with energy and charm, making reading him a singular pleasure.” —Nylon

“Hilarious, charming, and unlike anything else you'll read this year, these stories show more about the human psyche than one could possibly imagine.” —PopSugar

“McBride gives us [a] mix of hilarity and poignant truth in his collection of short stories, Five-Carat Soul... The ones that clarify injustice by making it hit us just as we are laughing the hardest—those stories are evidence of McBride’s genius.” —The Christian Century

“McBride delivers pure gold... Five-Carat Soul shakes with laughter, grips with passion and oozes wisdom. Readers should put aside any prejudices they might harbor about short fiction because together these stories are a masterpiece that will enrich everyone it touches.” —Shelf Awareness (starred review)

“Humming with invention and energy, the stories collected in McBride’s first fiction book since his National Book Award-winning The Good Lord Bird again affirm his storytelling gifts... McBride adopts a variety of dictions without losing his own distinctly supple, musical voice; as identities shift, 'truths' are challenged, and justice is done or, more often, subverted.” —Publishers Weekly (starred review)

“Each told with McBride's trademark insight, eye for character, and masterful story-telling ability, these pieces are sure to knock you out.” —Bustle

“Throughout the book, McBride effortlessly adapts different voices and perspectives…With this multifaceted volume, McBride proves once again that he’s a writer of remarkable range and facility.” —BookPage

“McBride's authentic characters and stories capture with humor and poignant insight the messiness of our internal (and external) lives and the world around us.” —Buzzfeed

“Stellar... McBride’s short stories joyfully abound with indelible characters whose personal philosophies are far wiser than their circumstances allow... [He] brings the snappy satire that endeared him to fans of the National Book Award-winning The Good Lord Bird and the courage and pathos that shone in The Miracle at St. Anna.” —Booklist (starred review)

“An exceptional group of stories... There’s a good amount of humor here, but most of these pieces are deeply emotional. This is McBride at his A-list best.” —Library Journal (starred review)

“McBride exhibits his formidable storytelling chops in an array of voices and settings... The charm emitted by these whimsical-yet-acerbic tales seems to come from a hypothetical late-19th-century collaboration of Mark Twain and Rudyard Kipling. McBride emerges here as a master of what some might call  ‘wisdom fiction,’ common to both The Twilight Zone and Bernard Malamud, offering instruction and moral edification to his readers without providing an Aesop-like moral.” —Kirkus Reviews (starred review)

James McBride is an accomplished musician and author of the National Book Award–winning The Good Lord Bird, the #1 bestselling American classic The Color of Water, and the bestsellers Song Yet Sung and Miracle at St. Anna. He is also the author of Kill ’Em and Leave, a James Brown biography. A recipient of the National Humanities Medal in 2016, McBride is a Distinguished Writer in Residence at New York University.
Loading...
or
Not Currently Available for Direct Purchase