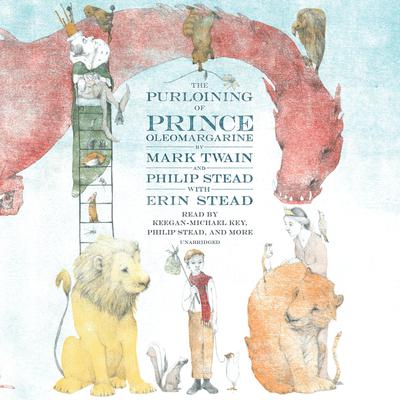 In a hotel in Paris one evening in the 1879, Mark Twain sat with his young daughters, who begged their father for a story. Choosing a picture from a magazine to get started, Twain began telling them the tale of Johnny, a poor boy in possession of some magical seeds, who finds himself on a quest to rescue a stolen prince. Later, Twain would jot down some rough notes about the story, but the tale was left unfinished . . . until now.

Plucked from the Mark Twain archives at the University of California, Berkeley, Twain’s notes now form the foundation of a fairy tale picked up over a century later. With only Twain’s fragmentary script and a story that stops partway as his guide, author Philip Stead has written a tale that imagines what might have been if Twain had fully realized this work. This is a story that reaches through time and brings us the debut children’s book of America’s most legendary writer, envisioned by one of today’s most important names in children’s literature.

Read by Keegan-Michael Key and Philip Stead, with Mark Bramhall as the voice of Mark Twain, Julia Whelan as Susy Clemens, and an Editor’s Note read by Frances Gilbert.

MARK TWAIN (1835–1910), considered one of the greatest writers in American literature, was born Samuel Langhorne Clemens in Florida, Missouri. As a young child, he moved with his family to Hannibal, Missouri, on the banks of the Mississippi River, a setting that inspired his two best-known novels, The Adventures of Tom Sawyer and The Adventures of Huckleberry Finn. Twain and his wife, Olivia Langdon Clemens, had four children—a son, Langdon, who died as an infant, and three daughters, Susy, Clara, and Jean.

PHILIP STEAD is the author of the Caldecott Medal–winning book A Sick Day for Amos McGee. With his wife, illustrator Erin Stead, he also created the acclaimed Bear Has a Story to Tell and Lenny & Lucy. Philip has also written and illustrated his own books, including Hello, My Name Is Ruby; Jonathan and the Big Blue Boat; and A Home for Bird. Philip and Erin live in northern Michigan. Visit Philip online at philipstead.com.