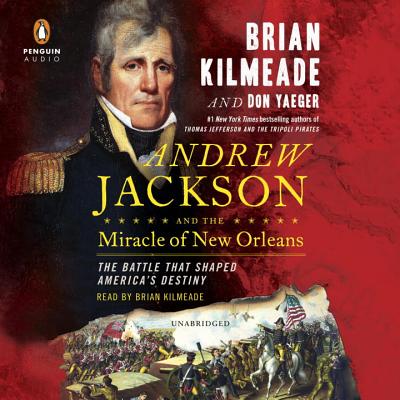 Andrew Jackson and the Miracle of New Orleans (CD-Audio)

BRIAN KILMEADE and DON YAEGER are the coauthors of George Washington's Secret Six and Thomas Jefferson and the Tripoli Pirates, both New York Times bestsellers. Kilmeade cohosts Fox News Channel's morning show Fox & Friends and hosts the daily national radio show The Brian Kilmeade Show. He lives on Long Island. This is his fifth book. Yaeger has written or cowritten twenty-five books and lives in Florida.

“Riveting history that reads like a stay-up-all-night thriller. Don’t miss this book!”
–Brad Thor, author of Use of Force.

"Kilmeade shows how the patriotism of Jackson and his generation made America great in the first place. A terrific read."
–Jane Hampton Cook, presidential historian and author of The Burning of the White House.

“The reader gets an inkling of the grit that made America great.”
–Erik Prince, author of Civilian Warriors
or
Not Currently Available for Direct Purchase
Copyright © 2020 American Booksellers Association