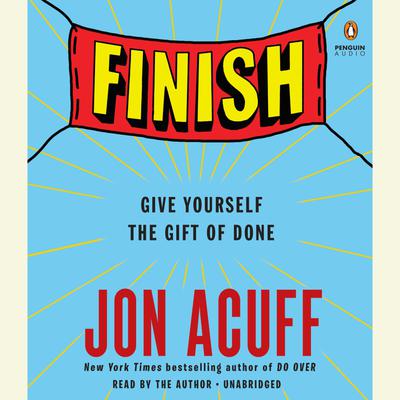 Give Yourself the Gift of Done

Year after year, readers pulled me aside at events and said, “I’ve never had a problem starting. I’ve started a million things, but I never finish them. Why can’t I finish?

According to studies, 92 percent of New Year’s resolutions fail. You’ve practically got a better shot at getting into Juilliard to become a ballerina than you do at finishing your goals.

For years, I thought my problem was that I didn’t try hard enough. So I started getting up earlier. I drank enough energy drinks to kill a horse. I hired a life coach and ate more superfoods. Nothing worked, although I did develop a pretty nice eyelid tremor from all the caffeine. It was like my eye was waving at you, very, very quickly.

Then, while leading a thirty-day online course to help people work on their goals, I learned something surprising: The most effective exercises were not those that pushed people to work harder. The ones that got people to the finish line did just the opposite— they took the pressure off.

Why? Because the sneakiest obstacle to meeting your goals is not laziness, but perfectionism. We’re our own worst critics, and if it looks like we’re not going to do something right, we prefer not to do it at all. That’s why we’re most likely to quit on day two, “the day after perfect”—when our results almost always underper­form our aspirations.

The strategies in this book are counterintuitive and might feel like cheating. But they’re based on studies conducted by a university researcher with hundreds of participants. You might not guess that having more fun, eliminating your secret rules, and choosing something to bomb intentionally works. But the data says otherwise. People who have fun are 43 percent more successful! Imagine if your diet, guitar playing, or small business was 43 percent more suc­cessful just by following a few simple principles.

If you’re tired of being a chronic starter and want to become a consistent finisher, you have two options: You can continue to beat yourself up and try harder, since this time that will work. Or you can give yourself the gift of done.

Jon Acuff is the New York Times-bestselling author of five books including his most recent, Do Over. He's helped some of the biggest brands in the world tell their story, including The Home Depot, Bose, Staples, and the Dave Ramsey Team. Most recently he's spoken to hundreds of thousands of people at companies such as Microsoft, Nissan and Comedy Central. Featured regularly on national media, Jon has been seen on CNN, Fox News, Good Day LA and several other key outlets.