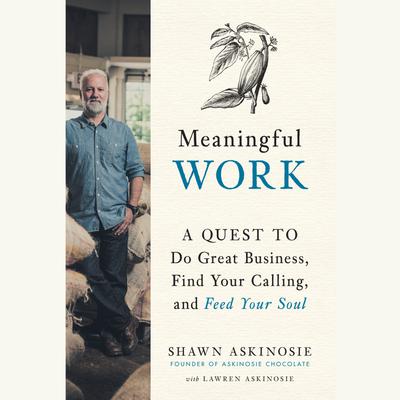 A Quest to Do Great Business, Find Your Calling, and Feed Your Soul

The founder and CEO of Askinosie Chocolate, an award-winning craft chocolate factory, shows readers how he discovered the secret to purposeful work and business − and how we can too, no matter what work we do.

Askinosie Chocolate is a small-batch, award winning chocolate company widely considered to be a vanguard in the industry. Known for sourcing 100% of his cocoa beans directly from farmers across the globe, Shawn Askinosie has pioneered direct trade and profit sharing in the craft chocolate industry with farmers in Tanzania, Ecuador, and the Philippines. In addition to developing relationships with smallholder farmers, the company also partners with schools in their origin communities to provide lunch to 1,600 children every day with no outside donations. Twenty-five years ago, Shawn Askinosie was a successful criminal defense lawyer trying his first murder death penalty case that would later go on to become a Dateline special. For many years he found law satisfying, but after several high profile trials he reached a breaking point and found solace in the search for a new career.

In this inspiring guide to discovering a vocation that feeds your heart and soul, Askinosie describes his quest to discover more meaningful work – a search that led him to volunteering in the palliative care wing of a hospital, to a Trappist monastery where he became inspired by the monks focus on “being” rather than “doing,” and eventually traipsing through jungles across the globe in search of excellent cocoa bean farmers to make award winning chocolate. Askinosie shares his hard-won insights into doing work that reflects one’s values and purpose in life. He shares with readers visioning tools that can be used in any industry or field to create a work life that is inspired and fulfilling. Askinosie shows us that everyone has the capacity to find meaning in their work and be a positive force for good in the world.

Shawn Askinosie is the founder of Askinosie Chocolate. His social business model has been featured in The New York Times, The Wall Street Journal, and on Bloomberg, Fox Business News, and numerous other media outlets. Askinosie was named by O, The Oprah Magazine, as "One of 15 Guys Who Are Saving the World." He is a Family Brother at Assumption Abbey, a Trappist monastery near Ava, Missouri.