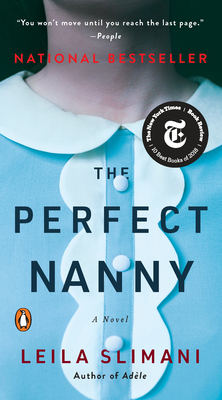 “With The Perfect Nanny, Moroccan author Leila Slimani channels her inner Ruth Rendell and offers a truly disturbing page-turner. The first chapter reveals that a nanny has killed her charges, a boy and a girl, then killed herself. The rest of the book details the way the nanny's mind twists and turns as she becomes more and more damaged, leading up to the murder-suicide. It's a grim tale filled with commentary on motherhood, family power struggles, and economic disparity. Although it sounds depressing, The Perfect Nanny is truly original, dark, and suspenseful as hell!”
— William Carl, Wellesley Books, Wellesley, MA
View the List

“I finished The Perfect Nanny in a day! I loved it. What I think makes it so very good is that even though you know how it ends after the first chapter, you keep reading! I was so drawn in, I found myself talking to the characters, thinking I could change things.”
— Shannon Walker, Buffalo Books and Coffee, ,
View the List

The national bestseller by the author of Adèle, Sex and Lies, and In the Country of Others

“You won't move until you reach the last page.” —People

She has the keys to their apartment. She knows everything. She has embedded herself so deeply in their lives that it now seems impossible to remove her.

When Myriam decides to return to work as a lawyer after having children, she and her husband look for the perfect nanny for their son and daughter. They never dreamed they would find Louise: a quiet, polite, devoted woman who sings to the children, cleans the family’s chic Paris apartment, stays late without complaint, and hosts enviable kiddie parties. But as the couple and the nanny become more dependent on one another, jealousy, resentment, and suspicions mount, shattering the idyllic tableau. Building tension with every page, The Perfect Nanny is a compulsive, riveting, bravely observed exploration of power, class, race, domesticity, motherhood, and madness—and the American debut of an immensely talented writer.

Praise For The Perfect Nanny: A Novel…

Finalist for the Los Angeles Times Book Prize for Mystery/Thriller

Finalist for the Edgar Award for Best Paperback Original

“Deliciously twisty . . . Slimani's exploration of race and class is razor-sharp and brilliantly provides the fuel for a hair-raising tale of domestic horror.” —Entertainment Weekly

“One of the most important books of the year. You can't un-read it.” —Barrie Hardymon, NPR's Weekend Edition

“A great novel . . . Incredibly engaging and disturbing . . . Slimani has us in her thrall.” —Roxane Gay, New York Times bestselling author of Bad Feminist and Hunger

“A book . . . that I've thought about pretty much every day . . . [It] felt less like an entertainment, or even a work of art, than like a compulsion. I found it extraordinary.” —Lauren Collins, The New Yorker

“It's excruciating, and almost more than anything that I could imagine—and therefore I read on.” —Pamela Paul, The New York Times Book Review (podcast)

“Brilliantly observed . . . Slimani is brilliantly insightful about the peculiar station nannies assume within the households of working families.” —The Wall Street Journal

“Dazzling . . . A portrait etched in shards of glass.” —John Freeman, The Boston Globe

“A taut page-turner about what can happen when no one pays attention to what matters most . . . Illuminates the treatment of domestic workers, the petty ugliness that can be endemic to marriage, and the primal fears that accompany having children.” —O, The Oprah Magazine

“If you love dark, propulsive thrillers, you'll be hooked.” —MSN

“Spare and evocative . . . A book that haunts you long after you've put it down.” —The Cut

“[An] unnerving cautionary tale . . . Pretty radical for a domestic thriller, but what's more remarkable about this unconventional novel is the author's intimate analysis of the special relationship between a mother and a nanny. . . . Slimani writes devastatingly perceptive character studies.” —Marilyn Stasio, The New York Times Book Review

“Chilling . . . A slim page-turner, The Perfect Nanny can be read in a single, shivery sitting.” —The Economist

“Slimani ratchets up the tension here through close quarters, resentment and complicity. The book . . . is chilling and an important look at the unseen challenges faced by service workers.” —The Washington Post

“Grabs us by the throat . . . The story's tension builds relentlessly.” —Minneapolis Star-Tribune

“A deft portrait of bourgeois family life in the twenty-first century . . . Readers aren't likely to converge on a single interpretation of why Louise has done what she's done. Ultimately, she holds sway as a symbol rather than as a psychological reality, a choice that makes this deftly told tale all the more eerie.” —The Atlantic

“Like Gone Girl, the novel deserves praise for pulling off a tricky plot with nuance. . . . Slimani's focus on race and class certainly elevates the book's crime-drama stakes into something more complicated.” —The New Republic

“This brutal chiller has the same compulsive readability as Emma Donoghue's Room.” —The Guardian

“The ‘French Gone Girl’ . . . Anyone reading [it] can tell within a few paragraphs that its author is a mother . . . who has felt firsthand the perfect split of agony, ecstasy and mind-numbing boredom that motherhood entails.” —The Telegraph

Leila Slimani is the first Moroccan woman to win France’s most prestigious literary prize, the Goncourt, which she won for The Perfect Nanny. Her first novel, Adèle, about a sex-addicted woman in Paris, won the La Mamounia Prize for the best book by a Moroccan author written in French and gave rise to her nonfiction book Sex and Lies: True Stories of Women's Intimate Lives in the Arab World. A journalist and frequent commentator on women’s and human rights, Slimani is French president Emmanuel Macron’s personal representative for the promotion of the French language and culture and was ranked #2 on Vanity Fair France’s annual list of the Fifty Most Influential French People in the World. Born in Rabat, Morocco, in 1981, she now lives in Paris with her French husband and their two young children.
Loading...
or support indie stores by buying on