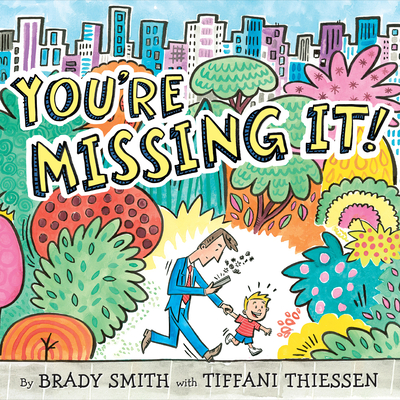 A busy Hollywood couple spins a hilarious cautionary tale about what happens when you are glued to your phone.

It's a lively day at the neighborhood park. Birds are singing, squirrels are frolicking, dogs are causing a commotion--and wide-eyed children are enthralled by it all. Too bad the parents are missing everything! It's going to take something really BIG to get them to disengage from their phones . . .

This timely story, brought to life with beautiful bold art, is a great reminder to slow down and savor time together.

Praise For You're Missing It!…

“Married actors Smith and Thiessen take playful aim at cellphone-addicted caregivers. . . . Smith’s bold pen-and-watercolor illustrations pop with tropical hues that aptly emphasize how vibrant the real world is when compared to a screen. A refreshing and opportune reminder to put down the phone and eye the butterflies.”—Publishers Weekly

Tiffani Thiessen is an actress and the author of the cookbook Pull Up a Chair. Her television roles include White Collar, Saved by the Bell, and Beverly Hills, 90210. Currently she stars in the Netflix series Alexa & Katie. You're Missing It! is her first picture book. Brady Smith and Tiffani Thiessen are married with two children, three dogs, eight chickens, and one fish named Goldie Han Solo. They live in the Los Angeles area.

Brady Smith, an illustrator and fine artist, has exhibited his paintings in a number of galleries in Los Angeles, New York City, and Houston. Also an actor and writer, he has appeared in and written numerous TV shows and movies. You're Missing It! is his first picture book. Brady Smith and Tiffani Thiessen are married with two children, three dogs, eight chickens, and one fish named Goldie Han Solo. They live in the Los Angeles area.
Loading...
or support indie stores by buying on