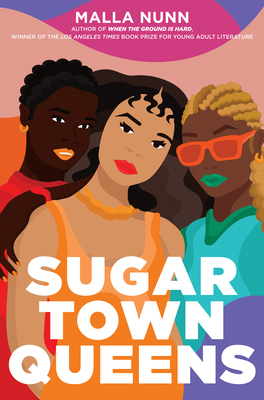 From Los Angeles Times Book Prize Award winner and Edgar Award nominee Malla Nunn comes a stunning portrait of a family divided and a powerful story of how friendship saves and heals.

When Amandla wakes up on her fifteenth birthday, she knows it's going to be one of her mother's difficult days. Her mother has had another vision. This one involves Amandla wearing a bedsheet loosely stitched as a dress. An outfit, her mother says, is certain to bring Amandla's father back home, as if he were the prince and this was the fairytale ending their family was destined for. But in truth, Amandla's father has long been gone--since before Amandla was born--and even her mother's memory of him is hazy. In fact, many of her mother's memories from before Amandla was born are hazy. It's just one of the many reasons people in Sugar Town give them strange looks--that and the fact her mother is white and Amandla is Black.

When Amandla finds a mysterious address in the bottom of her mother's handbag along with a large amount of cash, she decides it's finally time to get answers about her mother's life. What she discovers will change the shape and size of her family forever. But with her best friends at her side, Amandla is ready to take on family secrets and the devil himself. These Sugar Town queens are ready to take over the world to expose the hard truths of their lives.

★ “Amandla uncovers the painful secrets of her mother’s past with the help of supportive, intergenerational friends and family. She also gains the courage to confront violent ­misogyny and racism in a post-apartheid South Africa, coming to accept herself as a biracial, intelligent individual. This descriptive, fast-paced ­narrative is a compelling read that is difficult to put down and will likely fly off library shelves.” —School Library Journal, starred review

★ “Nunn grounds her tale in Amandla’s convictions and embrace of her life and neighbors in Sugar Town. Complexities of race and racism in Mandela’s freed South Africa are handled with realism and strength . . . but it is the resilient community that is front and center in Nunn's unique and detailed setting. Readers will cheer Amandla as she discovers who she is and where she came from in this captivating book.” —Booklist, starred review

★ “Nunn’s evocative storytelling will make you ache for Amandla. She is a complex creation whose circumstances are sensational but whose journey is relatable. Nunn surrounds Amandla with a diverse cast of characters who are similarly interesting and strongly developed. The novel’s hard truths about race and class are more than balanced by the love of all types that Amandla experiences. These supportive relationships are the most rewarding part of Sugar Town Queens, the glue that holds it all together.” —BookPage, starred review

★ “Part coming-of-age story, part mystery, infused with dysfunctional family dynamics . . . Amandla learns who really loves her, how many friends she has in Sugar Town, the vile and pervasive nature of racism in South Africa, and her own strength. Excellent narration by Bahni Turpin, especially in the subtle variation between Amandla and her mother’s voices, enhances this audiobook . . . An excellent story for teens who appreciate strong female protagonists and a story that reflects life in another country and culture.” —School Library Journal, starred review of the audiobook

“Nunn (When the Ground is Hard) illuminates the struggles of a cast of strong-willed South African women who build each other up while meeting the intersections of misogyny, racism, and classism head-on.” —Publishers Weekly

"The amazing community of their township, Sugar Town...is one of the strongest aspects of the story…a narrative that shows a young woman reckoning with possible paths lying ahead and harsh judgments of women’s behavior…This origin-story mystery…[is] engrossing to the end." —Kirkus Reviews

“Amandla’s story is a rewarding blend of high melodrama and gutsy realism, and…is compelling….In a novel whose subtextual message is the power of women, readers unfamiliar with South Africa may also be struck by the view into a society still highly stratified following the end of apartheid, while rooting for Amandla and her compatriots to upend the old order.” —The Bulletin of the Center for Children’s Books

“The excitement of the mystery; the memorable cast of characters, particularly the female characters; and the many twists and turns of the plot keep the pages turning until the very end.” —The Horn Book

“The persistent racism and stark economic inequalities of post-Mandela South Africa offer a colorful and illuminating political backdrop to this intriguing, beautifully written novel by Malla Nunn.” —The Buffalo News

“An intimate portrait of a family divided and the bonds that knit our communities . . . A story of race, class, the family you’re related to and the family you choose, Sugar Town Queens is . . . surprising and original.” —Culturess

“A spectacular and heartbreaking account of three generations of women fighting against prejudice, violence and injustice. . . a perfect balance between being character and plot-driven . . . Nunn gorgeously depicts the power of friendship. . . The complex and lovable characters make Sugar Town Queens an enticing read.” —ArtsHub

"Beautiful writing, great characterisation. A complex examination of race, class, family and patriarchy in modern South Africa. Anyone who thinks YA is a lesser genre needs to read this." —Maxine Beneba Clarke, The Hate Race and When We Say Black Lives Matter

"Sugar Town Queens is the story of a place and a family divided. It is the story of friendship and first love. Most of all, it is a powerful tale of three generations of women who join forces to fight against prejudice and violence." —Erin Gough, Flywheel and Amelia Westlake Was Here

"Gives voice to the new generation who push back for change in the world. A story of fierce girls, lost-and-found family, and friendship—I loved it." —Vikki Wakefield, This is How We Change the Ending

"Strikes the perfect balance between character and plot-driven story...Nunn does a phenomenal job at incorporating Zulu culture, tradition and language into the novel...and makes a point to talk about South Africa post-Mandela and the difficulties of bringing together a nation so divided by race and wealth. Like recent similarly politically charged YA novels The Hate U Give by Angie Thomas and I Am Change by Suzy Zail, context is given for these topics so they're easy to understand but never feel separate to the main story. In Sugar Town Queens Amandla's South Africa is both beautiful and deeply flawed, much like those she loves." —Tracy-Kate Simambo, Books + Publishing

★ “Turpin reads with a musical African accent. She makes fine distinctions among the characters’ voices and embodies Adele’s swiftly shifting emotions. American missionaries have clipped accents, and male characters sound credible. The richly evoked setting may be strange to American readers, and the vivid racism may be shocking, but teens will be drawn into the girls’ growing friendship and search for self.” —Booklist, starred review on audiobook

Malla Nunn was born and raised in Swaziland. Her adult crime books have earned her two Edgar nominations and a RUSA Award for Best Mystery Novel. Her first young adult novel, When the Ground is Hard, won the L.A. Times Book Prize for Young Adult Literature and the Josette Frank Award for Children's Literature.

After earning a master's degree in Theatre Studies, she dabbled in acting in New York City, worked as a cocktail waitress, a nanny, a bookseller, and on film sets, but never at the same time. She also made short films and an award-winning documentary, Servant of the Ancestors, before surrendering to her passion: writing books.

She married in a traditional Swazi ceremony. Her bride price was eighteen cows.
Loading...
or support indie stores by buying on