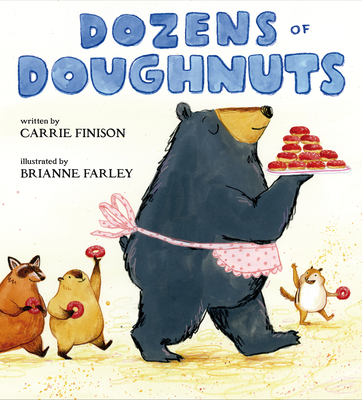 A generous but increasingly put-upon bear makes batch after batch of doughnuts for her woodland friends without saving any for herself in this delightful debut picture book about counting, sharing, and being a good friend.

LouAnn (a bear) is making a doughnut feast in preparation for her long winter's nap. But just before she takes the first bite, DING DONG! Her friend Woodrow (a woodchuck) drops by. LouAnn is happy to share her doughnuts, but as soon as she and Woodrow sit down to eat, DING DING! Clyde (a raccoon) is at the door. One by one, LouAnn's friends come over--Topsy (an opossum) and then Moufette (a skunk) and then Chip and Chomp (chipmunks)--until it's one big party. Louann welcomes her surprise guests and makes batch after batch of doughnuts, always dividing them equally among her friends. But she makes one BIG miscalculation. Soon LouAnn's kitchen is bare, winter is near, and she's had nothing to eat at all!

Praise For Dozens of Doughnuts…

"A silly book with an important message about boundaries and not putting yourself last in relationships." --Book Riot

"Deliver[s] as much satisfaction as . . . new doughnuts themselves." --Publishers Weekly

"Deliciously illustrated . . . I like the writing, the story, the art, the doughnuts, the counting, the whole kerschmozzle." --School Library Journal

Carrie Finison writes poetry, stories, and picture books for children. Dozens of Doughnuts is her debut picture book. She lives outside Boston with her husband, son, and daughter (who all love doughnuts), and two cats who allow her to work in their attic office.

Brianne Farley is the illustrator of Charlotte the Scientist is Squished by Camille Andros and its sequel Charlotte the Scientist Finds a Cure. She has also written and illustrated two picture books: Secret Tree Fort and Ike's Incredible Ink. Brianne studied creative writing and art at Macalester College, and then received her MFA in Illustration from the Savannah College of Art and Design. She lives in Michigan. Visit her at briannefarley.com or follow her on Instagram @briannehfarley and Twitter @briannefarley.
Loading...
or support indie stores by buying on