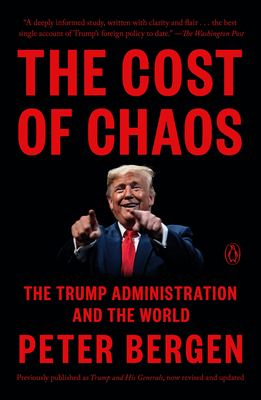 The Trump Administration and the World

Praise For The Cost of Chaos: The Trump Administration and the World…

“As Bergen, the author of several books on national security, shows, Donald Trump’s relationship to the American military is fraught because he has no understanding of the martial virtues and seems to assume that soldiering is simply a matter of violence, even uncaged brutality.” —The New York Times (Editor’s Choice)

Bergen is the author of seven books about national security, including three New York Times bestsellers and four Washington Post nonfiction books of the year. In 1997, as a producer for CNN, Bergen produced Osama bin Laden's first television interview, in which bin Laden declared war against the United States for the first time to a Western audience.

He lives in Washington, DC, with his wife, documentary producer Tresha Mabile, and their children, Pierre and Grace.
Loading...
or support indie stores by buying on