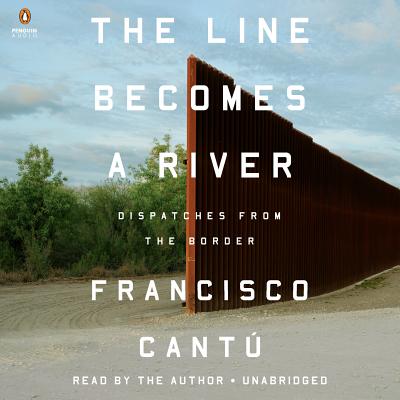 The instant New York Times bestseller, "A must-read for anyone who thinks 'build a wall' is the answer to anything." --Esquire

For Francisco Cantú, the border is in the blood: his mother, a park ranger and daughter of a Mexican immigrant, raised him in the scrublands of the Southwest. Driven to understand the hard realities of the landscape he loves, Cantú joins the Border Patrol. He and his partners learn to track other humans under blistering sun and through frigid nights. They haul in the dead and deliver to detention those they find alive. Plagued by a growing awareness of his complicity in a dehumanizing enterprise, he abandons the Patrol for civilian life. But when an immigrant friend travels to Mexico to visit his dying mother and does not return, Cantú discovers that the border has migrated with him, and now he must know the full extent of the violence it wreaks, on both sides of the line.

Praise For The Line Becomes a River: Dispatches from the Border…

“A must-read for anyone who thinks “build a wall” is the answer to anything.” —Esquire

“Cantú’s rich prose and deep empathy make this an indispensable look at one of America’s most divisive issues.”  —Publisher's Weekly (starred)

“There is a line dividing what we know and do not know.  Some see the world from one shore and some from the other.  Cantú brings the two together to a spiritual whole.  My gratitude for this work of the soul.”  —Sandra Cisneros

“A beautiful, fiercely honest, and nevertheless deeply empathetic look at those who police the border and the migrants who risk – and lose -- their lives crossing it. In a time of often ill-informed or downright deceitful political rhetoric, this book is an invaluable corrective.” —Phil Klay, author of Redeployment

"Francisco Cantu’s story is a lyrical journey that helps bridge the jagged line that divides us from them. His empathy reminds us of our humanity -- our immigrant history -- at a critical time.” —Alfredo Corchado, journalist, author of Midnight in Mexico

"Cantú’s story, and intelligent and humane perspective, should mortify anyone who ever thought building a wall might improve our lot. He advocates for clarity and compassion in place of xenophobia and uninformed rhetoric. His words are emotionally true and his literary sensibility uplifting.” –Barry Lopez, author of Arctic Dreams and Of Wolves and Men

"This book tells the hard poetry of the desert heart. If you think you know about immigration and the border, you will see there is much to learn. And you will be moved by its unexpected music." –Luis Alberto Urrea, author of The Devil’s Highway

FRANCISCO CANTÚ is an author and translator with an MFA in nonfiction from the University of Arizona. His essays and translations appear frequently in Guernica and his work can also be found in Best American Essays 2016, Ploughshares, Orion, and Public Books, where he serves as a contributing editor. A Fulbright fellow, Cantú also served as an agent for the United States Border Patrol from 2008 to 2012, working in the deserts of Arizona, New Mexico, and Texas.
Loading...
or support indie stores by buying on