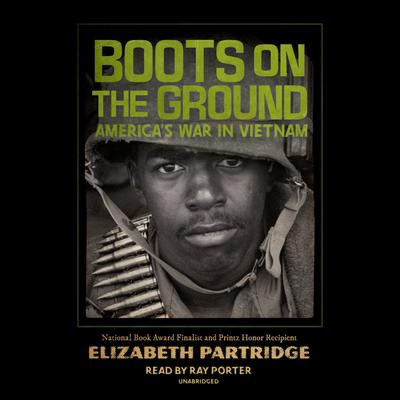 Boots on the Ground (Digital Audiobook)

In March 1965 President Lyndon B. Johnson sent troops into Vietnam. 57,939 American soldiers would be killed and seventeen years would pass before this controversial chapter of American history concluded with the dedication of the Vietnam Veterans Memorial in 1982.

The history of this era is complex; the cultural impact extraordinary. But it's the personal stories of eight people--six American soldiers, one American nurse, and one Vietnamese refugee--that form the heartbeat of Boots on the Ground. From dense jungles and terrifying firefights to chaotic medic rescues and evacuations, each individual's story reveals a different facet of the war and moves us forward in time. Alternating with these chapters are profiles of key American leaders and events, reminding us what was happening at home, including Kent State, Woodstock, and Watergate. This show-stopping book is Elizabeth Partridge at her finest.
Loading...