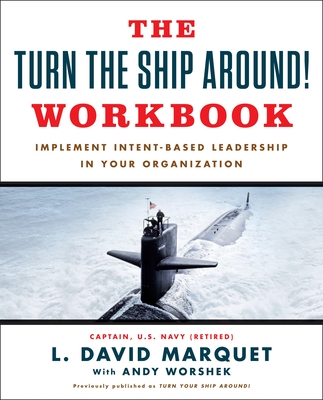 The Turn The Ship Around! Workbook (Paperback)

Implement Intent-Based Leadership In Your Organization

In Turn the Ship Around! former U.S. Navy Captain David Marquet introduced a bold new approach to leadership, based on his experiences turning around the troubled submarine USS Santa Fe. He gave up the traditional command-and-control model and instead inspired every member of his crew to embrace accountabliity. Santa Fe rapidly improved its dismal performance record and started winning awards as the best ship in its class.

In this workbook -- now a revised and expanded second edition, with a new title -- Marquet helps readers apply his methods to their own organizations. Featuring extensive questions and exercises on how to delegate and inspire, this workbook will help readers build a work community based on personal responsibility and trust. As Marquet writes:

Imagine a workplace where everone engages and contributes their full intellectual capacity, a place where people are happier and healthier because they have more control over their work -- a place where everyone is a leader.... All of this is possible, but not with the current leadership paradigm.

David Marquet, a top graduate of the U.S. Naval Academy, commanded the nuclear-powered, fast-attack submarine USS Santa Fe from 1999 to 2001. Since retiring from the Navy he has worked with businesses nationwide as a leadership consultant. He gives presentations around the world about his acclaimed first book, Turn the Ship Around: A True Story of Turning Leaders Into Followers. He lives in Florida with his wife, Jane.

Andy Worshek served with David Marquet and was instrumental in the turnaround of the USS Santa Fe, told in the business bestseller Turn the Ship Around!, where he is promeninetly mentioned. Andy helped implement the Intent-Based Leadership (TM) methodology while serving as the sonar chief and eventually chief of the boat for the USS Santa Fe, and continued to develop the methodology in the Navy and as head of HR at a leading accounting firm. Andy now travels extensively, delivering keynotes and workshops on Intent-Based Leadership. In his free time, he enjoys being with his family and volunteering at rodeo events. Andy resides in Oklahoma with his wife, Leigh.


Praise For The Turn The Ship Around! Workbook: Implement Intent-Based Leadership In Your Organization…

Praise for Turn the Ship Around!

"Captain Marquet's compelling leadership journey inspires each of us to imagine a world where every human being is intellectually engaged and fully committed to solving our toughest challenges. If it can be done on a nuclear submarine, it can be done everywhere. Turn the Ship Around! delivers a brilliant message." -- Liz Wiseman, Author of Multipliers: How the Best Leaders Make Everyone Smarter
or
Buy Here
Copyright © 2020 American Booksellers Association