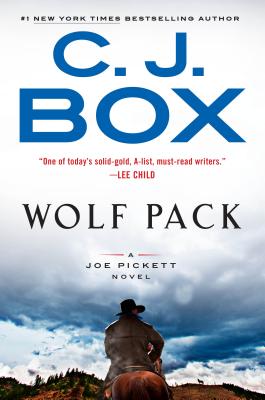 Wyoming game warden Joe Pickett encounters bad behavior on his own turf--only to have the FBI and the DOJ ask him to stand down--in the thrilling new novel from #1 New York Times-bestselling author C.J. Box.

The good news is that Joe Pickett has his job back, after his last adventure in The Disappeared. The bad news is that he's come to learn that a drone is killing wildlife--and the drone belongs to a mysterious and wealthy man whose son is dating Joe's own daughter, Lucy.

When Joe tries to lay down the rules for the drone operator, he's asked by the FBI and the DOJ to stand down, which only makes him more suspicious. Meanwhile, bodies are piling up in and around Joe's district in shocking numbers. He begins to fear that a pack of four vicious killers working on behalf of the Sinaloa cartel known as the Wolf Pack has arrived. Their target seems to be the mystery man and everyone--including Joe, Nate, and others--who is associated with him.

Teaming up with a female game warden (based on a real person, one of the few female game wardens at work in Wyoming today) to confront these assassins, Joe finds himself in the most violent and dangerous predicament he's ever faced.

“Look up tried and true in the literary dictionary and you’ll find a picture of C. J. Box, thanks to his superb Joe Pickett series. For proof look no further than Wolf Pack, in which Box tops even himself....A thriller of rare depth and emotion, featuring pitch perfect plotting and characterizations every bit the equal of Cormac McCarthy and Larry McMurtry.”—Providence Journal

“Just as nature is tough in the West, where the fittest and sometimes just the lucky survive, there are plenty of human casualties in Wolf Pack. Readers probably won't guess who will survive even as they appreciate the momentum of Box's wild, shoot-out conclusion.”—Columbus Dispatch

“Box is the king of contemporary crime fiction set in the West.”—Publishers Weekly (starred review)

“One of his most tightly wound tales, with more thrills than a snowy road on a steep mountain and more authority than the governor of Wyoming.”—Kirkus Reviews

“As always, Box takes familiar elements of his long running series...and seamlessly combines them into a read that makes your heart race, even though you won’t leave the couch until you’ve turned the last page. Half mystery, half thriller, totally worthwhile…You can just about set your watch by a Joe Pickett novel in March; the number-one-best-selling author’s legion of fans will be counting down the minutes.”—Booklist

“Wolf Pack is the most unexpected, relentless, and action-packed novel [Box has] ever written.” –The Real Book Spy, Featured Review

“Somewhere along the way, the Pickett books stopped being merely competent regional fiction-featuring stunning mountain scenery, ample hunting and fishing, and a likeable, cowboyish hero-and became one of the most consistently satisfying thriller series ever written...Joe Pickett now rivals Jack Reacher as a protagonist that loyal readers will follow anywhere...Veteran Box readers will expect this inevitable convergence to be both surprising and clever, and they will not be disappointed.”—Chapter16

“Reading Box's new book each year and following Joe, Marybeth, Nate Romanowski, and others is similar to catching up with old friends you haven't seen in a while. It's a real treat, especially for longtime fans of the series. Nobody has ever developed a family the way Box has with the Picketts over the course of nineteen novels. Whereas most series are losing steam and becoming repetitive this deep into their run, Box continues to find brilliant new ways to shake things up.”—CrimeReads, The Best New Thrillers This Month

“That this book is a thriller is appealing, but the scenery in the story is just as attractive and author C.J. Box tops it off by bringing into this novel many of his best-loved characters...If you're new to this author, prepare yourself for a future search for the rest of the series.”—Bookworm Sez

C. J. Box is the #1 New York Times bestselling author of the Joe Pickett series, five stand-alone novels, and the story collection Shots Fired. He has won the Edgar, Anthony, Macavity, Gumshoe, and two Barry awards, as well as the French Prix Calibre .38 and a French Elle magazine literary award. His books have been translated into twenty-seven languages. He and his wife Laurie split their time between their home and ranch in Wyoming.
Loading...
or
Not Currently Available for Direct Purchase