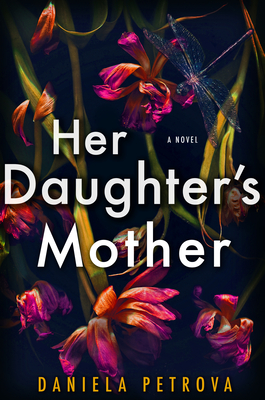 She befriended the one woman she was never supposed to meet. Now she's the key suspect in her disappearance. For fans of The Perfect Mother and The Wife Between Us comes a gripping psychological suspense debut about two strangers, one incredible connection, and the steep price of obsession.

Lana Stone has never considered herself a stalker--until the night she impulsively follows a familiar face through the streets of New York's Upper West Side. Her target? The "anonymous" egg donor she'd selected through an agency, the one who's making motherhood possible for her. Hungry to learn more about her, Lana plans only to watch her from a distance. But when circumstances bring them face-to-face, an unexpected friendship is born.

Katya, a student at Columbia, is the yin to Lana's yang, an impulsive free spirit who lives life at the edge. And for pragmatic Lana, she's a breath of fresh air and a welcome distraction from her painful breakup with her baby's father. Then, just as suddenly as Katya entered Lana's life, she disappears--and Lana might have been the last person to see her before she went missing. Determined to find out what became of the woman to whom she owes so much, Lana digs into Katya's past, even as the police grow suspicious of her motives. But she's unprepared for the secrets she unearths, and their power to change everything she thought she knew about those she loves best...

Praise For Her Daughter's Mother…


More Praise for Her Daughter's Mother

“If you’re a fan of thrillers like Girl on the Train or The Wife Between Us, you’ll need to check out this new novel.”—NBCnews.com (“20 End-of-Summer Beach Reads for 2019”)

“A perceptive plot wrapped around how infertility can destroy a relationship fuels the emotional Her Daughter’s Mother…But Petrova delves deeper in her plot with intriguing twists making even the most benign action and supposed coincidences seem sinister and foreboding.”—Associated Press

“Beyond the beautiful cover, Daniela Petrova's debut novel is absolutely dreamy and suspenseful.”—O, The Oprah Magazine

“Part psychological thriller, part murder mystery, Daniela Petrova’s ambitious and exhilarating debut novel grapples with what it means to become a parent in a world with ever-expanding options for growing a family….This impressive debut novel…ups the ante with each plot twist. Despite this weightiness, like the best crime fiction, Her Daughter’s Mother still makes for a page-turning beach read.”—Los Angeles Review of Books

“If you read one thriller this month, make it Her Daughter’s Mother.”—HelloGiggles (“Best New Books to Read in June”)

“[An] impressive debut…burning questions will keep readers on the edge of their seats…a gripping tale of the consequences of obsession. Petrova is off to a promising start.”—Publishers Weekly

“Petrova has written a consummate page-turner that also manages incredible layers of emotional depth. This is one of the year’s most provocative and eye-opening novels.”—Crime Reads

“[Her Daughter’s Mother] is ultimately rewarding…its darkness and wild resolution will appeal to many readers.”—Booklist

“I haven’t read a story that’s kept me guessing like this one has in a while...This is a unique page-turner that will have readers speculating how it’ll end from the beginning.”—Ms. Magazine (“June 2019 Reads for the Rest of Us”)

“A great choice for fans of The Girl On the Train and The Wife Between Us.”—The Uniontown Herald Standard

“Whoa! Talk about a doozy of a debut. Daniela Petrova’s Her Daughter’s Mother is a suspense thriller with intricately drawn characters, wily plotting, and a topical storyline that draws from the deep well of complexities involving a woman’s desperate desire to give birth…By the time the last page is turned, readers might be tempted to start all over again— with heightened awareness—taking in the lies, the love, the desperation, and the mania that drives baby love.”—Mystery Scene

"Her Daughter's Mother is a tension-filled tale that reveals one layer of subterfuge after another as more and more of the story comes to light."—BookReporter

“[Her Daughter’s Mother] is a fun, unputdownable thriller…The premise is so clever and original, and Petrova totally delivers with juicy twists and characters with real emotional depth. It’s the kind of quick, smart read you’ll devour poolside.”—Andrea Bartz, author of The Lost Night

“Her Daughter's Mother had me from the very first page. With a dazzling plot; complex, unforgettable characters; and gorgeous prose that mines the dangerous depths of obsession, Daniela Petrova's debut is undoubtedly going to be the book everyone will want to read this summer.”—Aimee Molloy, New York Times bestselling author of The Perfect Mother

“Her Daughter's Mother has all the hallmarks of great psychological suspense: a compelling mystery, a cast of intriguing and suspicious characters, and plenty of stunning surprises. But it is the journey of the novel's protagonists--each trying to find family, connection, and redemption--that makes this page-turner a tender, moving story you won't soon forget.”—Megan Collins, author of The Winter Sister

“Taut pacing, relatable characters, and a twisty, surprising plot combine in this tense and poignant thriller. Secrets and obsession leave their mark in this unputdownable story—a remarkable debut.”—Megan Miranda, New York Times bestselling author of All the Missing Girls, The Perfect Stranger, and The Last House Guest

“Captivating and powerful, Her Daughter’s Mother is both a thought-provoking story about the ethical gray area one woman stumbles into on her quest for motherhood, and a twisty thriller about another woman’s abrupt disappearance. Secrets, obsession, lies, betrayals big and small—they’re all here in this expertly paced novel that will keep readers guessing right up until the very last page.”—Kathleen Barber, author of Are You Sleeping

“This moving, heartfelt thriller surprised me again and again. Lana’s journey to becoming a mother is poignant and suspenseful, even without the added element of her egg donor’s disappearance. The turns of this story ratchet up the intrigue, making Her Daughter’s Mother one of the most gripping books I’ve read in years...A sure-footed, memorable debut.”—Erica Wright, author of The Blue Kingfisher

Daniela Petrova is a recipient of an Artist Fellowship in Writing from the Massachusetts Cultural Council. Her short stories, poems and essays have been published in The New York Times, The Washington Post, Salon, and Marie Claire. Born and raised in Sofia, Bulgaria, Petrova currently lives in New York City.
Loading...
or
Not Currently Available for Direct Purchase