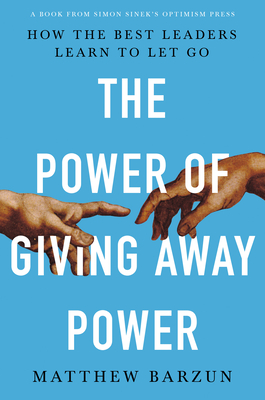 The Power of Giving Away Power

How the Best Leaders Learn to Let Go

“This book is a breakthrough. It’s beautifully written, perfectly timed and heralds a new way forward. I’m buying a dozen copies to share with friends and colleagues.”

-Seth Godin, Founder of altMBA and author of The Practice

If you let go of hierarchy, chaos will reign...or so many leaders believe.

But when leaders find the courage to distribute rather than hoard power, creativity multiplies, trust deepens, and inclusivity expands... and a new kind of order emerges.

A few rare leaders have learned to embrace a new organizational shape and mindset: Constellations. Organizations designed as constellations are dynamic and flexible networks of distinct yet interwoven individuals. Each member of the team feels like a singular star and is also connected to others to form something greater. That is how Visa reimagined how we pay for things, how Wikipedia beat the richest company in the world and how Barack Obama and his grassroots team revolutionized political campaigning. These leaders did what most leaders dread – they gave away power.

Barzun brilliantly layers lessons across history and industries with his own experiences as an internet entrepreneur, political organizer, and US ambassador to the United Kingdom and Sweden. The Power of Giving Away Power shows how the Constellation mindset shines in some of the most impactful organizations and innovations the world has ever known. And it encourages us all to recognize, as Barzun writes, "the power we can create by seeing the power in others" — and making the leap to lead. Together.

Praise For The Power of Giving Away Power: How the Best Leaders Learn to Let Go…

“He can indeed make his constellation theory sound appealing… The Power of Giving Away Power is surprisingly (and refreshingly) nonpartisan.”
The Wall Street Journal

“Bravo. These are ideas that can heal and inspire in a time when we are suspicious, tribal, at each others’ throats.”
Ken Burns, Documentary Filmmaker

“Matthew Barzun might well be the first modest man to write a great book on leadership. This is a gift."
Richard Thaler, Nobel Prize Laureate and co-author of Nudge

"This is the manifesto we need right now. Barzun shows that sharing power, counterintutively, magnifies everyone's impact and helps leaders get more done."
Charles Duhigg, Author of The Power of Habit and Smarter Faster Better

"A brilliant challenge to conventions that have held back organizations for decades and a crisp playbook for making distributed leadership work for everyone."
Ted Sarandos, Co-CEO and Chief Content Officer, Netflix

“A gift. This is certainly the path to the collective leadership we need to tackle today’s challenges and shape a better future.”
Wendy Kopp, Founder, Teach For America

"Fun, informative, and mind-expanding for everyone, whether you're leading a business, a country, or a family."
Danny Meyer, CEO of the Union Square Hospitality Group

"A remarkable book about creating order without control and freedom without chaos, from an original and counterintuitive leader and thinker."
Daniel H. Pink, Author of When, Drive, and To Sell Is Human

"Unexpected encounters! Barzun introduces you to people and ideas you never knew but should if you really care about leadership."
Vint Cerf, Internet Pioneer

“An extraordinary book about human flourishing, about linking ourselves properly to the best bits of ourselves and of others to move mountains. Enlightening and brain reviving.”
Alain de Botton, Author of How Proust Can Change Your Life

"Anyone who seeks to be a better, stronger, wiser and more effective leader would do well to read this collection of engaging stories about the power of empowering others."
Michael R. Bloomberg, founder of Bloomberg LP and Bloomberg Philanthropies and Mayor of New York, 2002-2013

“A book as provocative, energizing, and humane as Barzun himself. It points the way forward in a time in which we desperately need new and better leadership.”
Admiral James Stavridis, former USN Supreme Allied Commander at NATO

“Matthew’s leadership style has always been collaborative and celebratory of his teams, but in this wonderful book he shares the power of how lifting people up to lift up the entire organization.”
Nicole A. Avant, TV and Film Producer and former US Ambassador to the Commonwealth of the Bahamas.

“This is an incredibly timely book and blueprint into how power and leadership should operate within the world. Through this exploration we are able to see the possibility of a new and inspiring world that exists when power is interwoven.”
Sir David Adjaye, Architect, National Museum of African American Culture & History

“With compelling personal and historical stories Barzun artfully makes the case for replacing the Great Man myth of leadership with effective leadership through empowering others. An upbeat and refreshing book.”
Louise Richardson, Vice-Chancellor of Oxford University

“This is a treatise on grace that shows a way to move forward at rocket speed and to solve the problems that paralyze so many ostensible leaders today.  It’s vivid and generous and often witty and deeply insightful.
Andrew Solomon, Author, Far From the Tree

"Take to heart Barzun’s bracing 'declaration of interdependence'—an engagingly personal primer on how we might change the world by changing ourselves, together."
Hank Meijer, Chairman of Meijer Inc.

"A riveting and unforgettable journey through the wisdom of largely-forgotten visionaries with profound potential to reshape modern leadership for the better."
Jeffrey Rosen, President & CEO, National Constitution Center

"I had the opportunity to meet Matthew during the time he was ambassador in Britain. I was astonished by his thinking. Whenever we would have occasion to talk, I would scramble to find a pen and paper so I could take notes on everything he said. Now, thankfully, we have this book."
Simon Sinek, Author, Start With Why & The Infinite Game

"The book is illuminating. It challenges you to take a hard look at your own leadership style...it's that good."
Stacey Wade, CEO and executive creative director, Nimbus

“Redistributing power, an anthem of our times, gets a new twist from a former US Ambassador who rejects exerting power over whomever and whatever we can. Barzun engagingly argues for abandoning hierarchy to empower ‘constellations’ of diverse workers and teammates seeking the freedom to ‘stand out and fit in.’”
Anita L. Allen, JD., PhD, Henry R Silverman Professor of Law and Professor of Philosophy, University of Pennsylvania

Matthew Barzun has always been fascinated about how we can stand out and fit in at the same time. He helped countries do both when he served as US ambassador to the United Kingdom and to Sweden. He helped citizens do both as National Finance Chair for Barack Obama by pioneering new ways for people to have a stronger voice in politics. And he helped tech consumers do both as an entrepreneur when he helped build CNET Networks in the early 90’s. Barzun was raised on the East Coast, started his career on the West Coast, and settled in the middle in Louisville, Kentucky with his wife, Brooke, and their three children.
Loading...
or support indie stores by buying on